This "Historically Speaking" column was published in the Exeter News-Letter on Friday, March 29, 2019.

Nearly every biography of poet James Monroe Whitfield states that his early life in Exeter has ‘few details.’ Whitfield was born in Exeter on April 12, 1822. His birth was registered in the town along with the births of four other siblings, but this may not be all of the family records. The family history is a mixture of official records, family stories and reminiscences of largely white fellow townsmen. Untangling the often conflicting evidence takes some care and occasional skepticism. 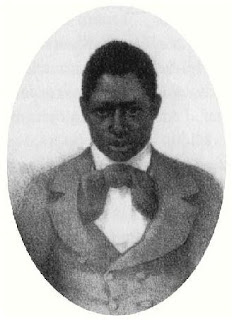 At the end of his life in 1871, we know that James Whitfield was held in high regard among the Black community in the American northwest. He died of heart disease in San Francisco at the relatively young age of 49. He’d worked as a barber for most of his life – on each of the four U.S. Census records on which he appears, he is listed as “barber” without any mention of his poetry. His only published collection, America and Other Poems, is described by Joan R. Sherman as “outstanding for its metrical control, breadth of classical imagery, commanding historical sense, and convincing anger. With biting cynicism, he denounces oppression worldwide and scourges America’s morally corrupt church and state in two long antislavery jeremiads, 'America' and 'How Long?'” It is not the work of the average barber.

The Whitfield family lived on an unfinished street called “Whitfield’s Lane.” Today, you can find the location of the family home on the corner of Elliot and Court Streets. It was described as a modest one story home. Joseph Whitfield, James’ father, was born enslaved in Virginia around 1762. At some point before 1797, he slipped away from his master and escaped to Newburyport, Massachusetts, where he met Nancy Paul, an educated young woman from Exeter, New Hampshire. The two married in Exeter in December of 1797. The couple didn’t immediately settle in town. Perhaps there were still some ties to Newburyport that needed to be severed. In any case, in 1799, they returned to Exeter and Joseph was issued with a ‘warning out’ – a formal notice that the town would not be responsible for him or his family should they need financial support. These types of decrees were common in New England and didn’t necessarily mean a person had to leave town. Joseph and Nancy chose to remain, but the indignity of the circumstances must have been hard to bear. The town selectmen must have felt that an escaped slave had a poor chance of making a living. Nancy, of course, knew better. Her father, Caesar Paul, had been enslaved to John Gilman during the French and Indian War. He was freed and married Lovey Rollins, the white daughter of a Stratham lawyer. They were an educated family with three of Nancy’s brothers becoming noted Baptist ministers.

We’re not sure how many brothers and sisters James had at the time of his birth. The 1820 census lists Joseph as having six children. Birth records in New Hampshire only mention three children born in 1814, 1817 and 1819. Two other children were born after the census, James in 1822, and another unnamed in 1824. The couple may have had as many as eight children born to them in Exeter. As child mortality was high at the time, some may not have survived. In any case, James would have grown up in a town that had a considerable Black population. Exeter became a place where many Black Revolutionary War veterans settled. Nancy’s sister, Rhoda, had married Jude Hall – a former slave freed after his military service. James was well aware that African Americans had played a large role in America’s fight for independence. He would have also known that even those of his race who were free were often not safe. Three of James’ cousins were kidnapped into slavery in spite of having been born free. James’ father would be able to tell the boy about the horrors of slavery and perils of escape. If today’s young Black men all remember when their parents gave them ‘the talk’ – how to protect themselves in racist America – it’s certain that James’ parents were just as vigilant.

Schools in Exeter were not segregated by race. Living in District 1, James would have attended the school on Spring Street. Here James would have been taught the basics of reading and writing. Education in Exeter was elevated a bit above most towns owing to the presence of Phillips Exeter Academy. Even in the early 1800s, Exeter was known as something of a literary town. Several of his older sisters joined the First Baptist Church. Charlotte Whitfield joined before James was born in 1819, and then died the following year. Elizabeth joined in 1825. She would then marry Jesse Allen. The church records note that it was “voted to dismiss Elizabeth Allin to join the 2nd Baptist Church in Boston” in 1835. Another sister, Irena, joined in 1829. This was the same year that the death of Nancy Paul Whitfield was recorded, leaving young James without a mother at the age of seven. He may have moved in with one of his sisters, perhaps Elizabeth, at this point because the 1830 census lists Joseph as living alone. He died in 1832, the Exeter News-Letter noting, “Mr Joseph Whitfield, a coloured man, aged about 70 years. He was found dead in the lane leading to his house, and is supposed to have fallen a victim to a fit of apoplexy. Whitfield has borne through life the character of a worthy and industrious man, and perhaps more richly deserves to have a paragraph penned in his praise, than many whose riches have entitled them to a column of eulogy.” And yet, no more was written of him. Later, a few of Exeter’s white citizens would remember that Whitfield had been a noted hunter and gardener. After Joseph’s death, the remaining members of the family left. James is often incorrectly said to be from Massachusetts, so it’s likely he followed his sister Elizabeth and her family to Boston after his father’s death. “Whitfield Lane” was renamed “Elliot Street” in 1845. The family may well have been forgotten if not for James’ later fame as a poet.

James and his brother Joseph Jr. would later move to Buffalo, New York, where both worked as barbers. In 1854, the Exeter Town Library received a shipment of books from James Leavitt of Buffalo, which included 100 copies of Whitfield’s America and Other Poems for sale. In his enclosed letter, Leavitt remarked, “In a late number of the News-Letter, I saw mentioned a number of worthy and promising sons of Exeter, to which you may safely add another, - I mean James M. Whitfield, whose history is a sufficient refutation of that I trust, now obsolute idea, that a black man has no talent nor any capacity to excel. He has not been at school since he left Exeter, at nine years of age, and has been obliged to support himself and a family, yet has made himself a good classical scholar and a poet of no mean order.” The library did not keep any of the volumes. The catalog of books for the Exeter Public Library in 1856, 1885 and 1896 do not list any works of James Whitfield. Happily, you can find them there today. James Monroe Whitfield should reach a larger audience.

The poetry of James Whitfield will be featured at Exeter’s Lit Fest, April 6, 2019.