This "Historically Speaking" column was published in the Exeter News-Letter on Friday, January 4, 2019.

In January 1918, Exeter residents didn’t have a lot to be happy about. World War I was entering its 10th month. There was a shortage of coal and the winter was proving to be bitterly cold. The Exeter News-Letter tried to look on the bright side. “Fred Colcord finished his harvesting of ice last Saturday,” the paper noted. “Much of it is 22 inches thick.” But before this bit of seeming good-luck could be viewed as positive, it was added, “Few refrigerators take ice of that thickness and the cutting of cakes for delivery will entail considerable waste.”

If the war and the cold weren’t troubling enough, there were other problems that were unsettling. Women were a problem. The newspaper is full of concern about girls and how they spent their time. Clubs, like the Fireside Girls Club or Campfire Girls, were encouraged to keep girls busy. They were urged to join the Red Cross to participate in war work. Women were needed to fill in for the men who were away at war. “Exeter,” the News-Letter announced with startled simplicity, “has three lady milkmen.” The same July edition noted that women would be eligible for rural carrier positions and, “at the request of the post office department” women would be admitted to “rural carrier examinations upon the same conditions as men” for the duration of the war. What was the world coming to? Soon the ladies might seriously want to vote!

To counter this disturbing trend, Hollywood cranked out films designed to warn against the loss of femininity. The Ioka featured: “Womanhood: The Glory of the Nation!” “Sirens of the Sea” (“a seductive dream of fair women”) and the cautionary, “Enlighten Thy Daughter,” (“an education to the Mothers and Fathers of America. A lesson to our young girls. A treat to the Motherhood of this generation!”) The Women’s Club proposed hiring a town social worker. “Too many young girls court temptation in our streets, lacking home restraint and ignorant of danger. Much could be done by a wise woman to help anxious but impotent mothers,” read a letter to the editor. As if mothers didn’t have enough to do worrying about their sons off at war.

There were also disturbing environmental issues threatening the town. The Gypsy Moth invasion that had begun in the 1880s was still a concern. In early April people were reminded, “A great many clusters of gypsy moth eggs may be seen on shade trees in and near our streets. It is very important that these egg clusters be painted with creosote in the next two weeks.” Areas where gypsy moths were allowed to flourish would be bare of leaves and fruit. The caterpillars were hard to kill and the rapid spread of the pests alarmed many people. And there was another tree killer on the way – white pine blister rust. In February, the Gilman Grange hosted a talk by George Barrus of the US Department of Agriculture to explain the threat. “The blister rust threatens the future of every white pine in New Hampshire and it is important that everything be done to suppress it.”

The News-Letter did have a piece of good news for the town – Lady Justice returned. “The statue of Justice has been replaced on the cupola of the Town Hall, where since 1855 it had stood until the severe wind of October 30 last so damaged it that temporary removal was required for restorative work.” The revived statue, which was completely rebuilt from the waist down, was hoisted aloft on March 29 and the staging was removed on April 1st. “That it will surmount the cupola for scores of years now seems assured,” noted the paper. The rebuilt statue stood for another 74 years until it was replaced again in 1992.

As the year progressed, all other news was swallowed by two events. Although men were still being shipped abroad to fight and women were being encouraged to take nursing training, the war was clearly coming to an end by the fall months. The signing of the Armistice in November brought unbridled joy. But this news arrived in the midst of a local nightmare. On September 27th, the News-Letter first reported on the epidemic, in case residents hadn’t noticed the growing number of obituaries. “The ‘Spanish Influenza,’ so-called, probably the grippe in severe form after a cycle of comparative mildness, has gained a strong foothold in Exeter. Hundreds are affected by severe colds, grippe and too many by pneumonia. To list its victims is impracticable. They are of all classes and ages and in instances entire families are affected.” The town practically shut down for an entire month. The death figures tell the story – the town report in 1917 listed a normal average of 57 total deaths for the town. The 1918 report listed 107 – most of which occurred from September through December. Influenza killed and sickened people in the prime of life. Exeter Cottage hospital was overwhelmed as the patient load increased; the staff became ill as well. The Exeter Manufacturing Company lost both employees and the management heir apparent, Richard Kent. As the year was coming to a close, most people thought the influenza was finally lifting. On December 20th, along with notices of people recovering, the News-Letter reported, “Miss Marion H. Locke, a graduate of the Seminary in 1910, of Wellesley in 1915, and since a Seminary teacher, died last evening at the Cottage hospital of pneumonia.” 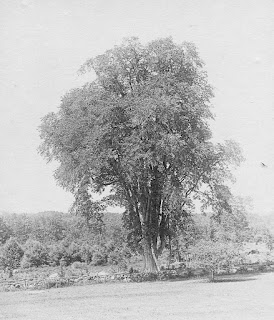 To cap off what had been a miserable year, the final edition of the Exeter News-Letter for 1918 sadly reported on the removal of the Bridal Elm. “Bride Hill on the Hampton-Exeter line has lost its chief glory, the Bridal Elm, which had been a landmark since the settlement of the two towns. In its prime it was a tree of exceptional size, beauty and symmetry, but in recent years it had been marred by ice storms and gales, and age had weakened it. It has now been felled under the direction of Mr. Newell S. Tilton. Four feet from the butt the trunk measured eight feet in diameter and some of its branches had a diameter of three feet or more. Tradition, which unfortunately cannot be verified, has it that in the olden time a couple were married beneath the old tree, thus giving it its name.”

1918 was truly one of those years most people were ready to forget. 1919 began quietly without the usual hopeful editorials.

Image: The Bridal Elm, seen in this undated photo, stood near the town line between Exeter and Hampton. It was the legendary site of a romantic runaway marriage. 1918 proved to be an unsettling year for most local residents. The felling of the Bridal Elm capped off their disappointment.
Email Post