100 Years Ago the Great War Ended

This "Historically Speaking" column was published in the Exeter News-Letter on Friday, November 9, 2018. 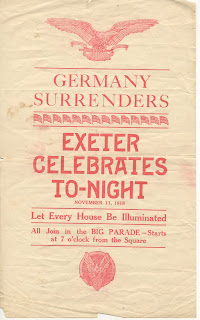 In the early afternoon of November 7, 1918, Helen Tufts was attending a short lecture on the “History of Hymns.” She was, after all, the organist at the Unitarian church and the talk was a welcome distraction from war news. Helen, like many Exeter residents, was still recovering from a bout of influenza that had taken the lives of over 25 in town. As the speaker began her talk, “whistles began to blow and bells to ring & we discovered that perhaps peace had been declared. I helped to ring the town bell!” The Exeter News-Letter reported the following day, “the welcome news of midafternoon yesterday that Germany had agreed to the terms of armistice was followed by the prolonged din of bells and whistles and an enthusiastic demonstration by townspeople and students. The feature was the parade of snake dancing Seminary girls. In the evening the town and student bands combined in an impromptu concert in the Swasey Pavilion.” But alas, there was no peace treaty signed that night. Helen went home, writing the final line in her diary that night: “Apparently peace isn’t settled. Played backgammon.”

The rumor in town was probably started by the publication of the afternoon Portsmouth Herald, which led with the headline: “CABLE REPORTS PEACE SIGNED,” which, quite frankly, seems pretty clear. A close reading of the Associated Press story, however, reveals a lot of uncertainty. “Navy cable censors reported today an unofficial message came through from abroad announcing that Germany had signed Marshall Foch’s armistice terms. No authority could be given for the message and the reports could not be verified. None of the Allied headquarters had been advised nor any embassy had any such word. The U.S. officials are without any advice.” It seems most people didn’t read farther than the screaming headline. The rumor was so widespread that President Wilson issued a denial and the next day the Herald headline ran: “ARMISTICE HOAX – MAY PUNISH FAKERS.” There was a box warning on the front page warning the public of, “the folly of putting credence in rumors emanating from unauthorized and irresponsible sources. As peace draws nearer, the temptation to spread such ‘fakes’ grows. The moral for the public is plain: Don’t credit tales that peace has come until the news is contained in statements, in whose veracity you can have confidence.” Like maybe read more than headlines?

In any case, one thing was clear – people were ready for the war to end. The Ottoman and Austro-Hungarian empires had already agreed to terms, Germany was the final holdout. Meanwhile, war work was scaling back. Quebec stopped arming its steamships. The naval shipyards in Portsmouth halted Sunday shifts. Boston stocked up on fireworks; “Twenty-five tons of red fire was placed at the disposal of the City of Boston today to be set off when official word comes that the armistice between Germany and the Allies have been signed. The lot consists of 30,000 sticks as are used for railroad signaling.”

Back in Exeter, Helen celebrated her 22nd birthday on Sunday, November 10th. She played the organ in church that morning, noted her Sunday school class had promoted several of her students, and went home to a glorious surprise party organized by her parents. By the time the music and singing and cake was done, Helen settled down for the evening only to be called to the phone. Her friend, Mr. Goff of East Kingston had called the editor of the Providence Journal who reported that Kaiser Wilhelm had abdicated the previous day and fled to Holland. “Hooray!” she penned in the journal.

Monday morning was mayhem. At 4:45AM, Albert McReel, “whose only son is in service in France…was awakened by a telephone call, which told him the glad news. He at once informed Chief Engineer George Carter (because naturally, you’d call the fire chief, right?) and the quick result was the blowing of all whistles and the ringing of bells, which continued at frequent intervals throughout the day.” Helen recalled the din began closer to 5:30, so perhaps McReel and Carter took some steps to verify the information. This time, it was real. The armistice was signed – fighting would cease at “the eleventh hour of the eleventh day of the eleventh month.” The documents had been signed in a railroad car in Compiegne, France at 5:00 AM, allowing six final hours of brutal fighting as both sides tried to eke out more territory. By the time news got to America, the guns had been stilled.

Perhaps it was because of the earlier false alarm that people knew exactly what kind of celebration they wanted. Early shifts at manufacturing companies – in both Portsmouth and Exeter – marched through the streets. Nearly two years of government propaganda told them that they had contributed to winning the war. School children, unsure of what to do, reported to class, only to be met by exuberant staff who quickly shuttled them to assembly rooms for patriotic singing. By mid-morning, both towns were planning celebrations for the day. Portsmouth held a rally (“There will be no requests for contributions at the meeting” it happily advised) followed by a huge parade. “The city simply arose and like magic there sprung up a celebration that would have taken weeks of preparation” the Herald noted.

Helen went to the planning meeting and later reported to the Robinson Seminary – her old school – to help with costumes. There she made a red hat with red, white and blue tassels for the planned parade. She wore a white dress, shoes and sweater – grossly out of season – festooned with her Liberty Loan buttons and service pin. The town was lit up as it hadn’t been since the war began. Helen’s mother put 30 candles in the windows of their home on Pine Street. The Exeter News-Letter mentioned “The Brass works on Winter Street …was aglow with light. Mr. Charles A. Taylor’s yard was lighted by gasoline torches to fine effect and in Depot Square (on Lincoln Street) Mr. Daniel Kelleher discharged rockets and other fireworks as the column passed.” Marching with the Seminary Girls that evening, she happily noted, that she had a torch, until it burned out, but “Once when I got delayed looking after Marg Brown I had to run past the battalion and they all cheered! They were hilarious anyway! Father (newly elected State Senator James Albert Tufts) spoke at the square, but I didn’t hear him.” Not wanting the party to end with speechifying, “the celebration closed with informal dancing in the Town Hall, to music by the Max Cohen orchestra.” It was a party never to be forgotten.

The Portsmouth Herald summed up the day: “Victory Day will go down in the glorious history of this city as one of the most eventful in the long annuls of great events. A day when the people of the city celebrated in a most wonderful manner the closing of the World’s greatest war and the declaration of what will be the peace of the world, for we hope centuries to come.” But winning is easy, governing is hard, to paraphrase a scene from Hamilton. Peace in Europe would only last 21 years.