Tragedy at the Isle of Shoals

This "Historically Speaking" column was published in the Exeter News-Letter on Friday, July 6, 2018. 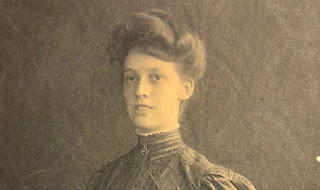 In the summer of 1902, Laura Gilmore of Exeter was looking forward to the future. She’d graduated from the Robinson Female Seminary in June and was set to begin post-graduate studies in the RFS Normal School in the fall to qualify as a teacher. At 20, she was a bit older than most of her fellow graduates, but her maturity may have helped her get a fabulous summer job. Her older sister, Harriet – known by everyone as ‘Hattie’ – was working on Star Island at the Oceanic House as a waitress. Harriet was attending Wellington Training School in Cambridge, Massachusetts. Three years older than Laura, she’d already taught a year of school. If Laura was willing to join Hattie at Starr Island, the two would have a corking good summer together. Two of Laura’s school chums ventured out to visit them – Helen Batchelder and Alice Lane.

The wait staff at the Oceanic was largely comprised of young students and teachers. The season opened the beginning of July. Hard work was balanced with cool breezes and an escape from small town life. The hotel offered excursions to the staff during off hours. On the afternoon of July 17th, the hired boatman, Fred Miles, brought a group into the dock at Appledore Island. The group felt the weather was about to turn and wanted to be onshore. To their great surprise, a happy party of the Oceanic wait staff was waiting at Star Island to board. Miles could see that there were dark clouds around, but the group was merry and he didn’t feel the weather was an issue. An experienced boatman, he’d never had any issues with his 19 foot whale boat. It was fitted with heavy ballast to keep it steady in the tricky swells of the Isles of Shoals. Sixteen excited young people, fourteen girls and two boys, piled into the boat, which Miles – who was later accused of overloading – said was fine. Helen and Alice, however, decided it was too crowded and took a steamer back to the mainland. The whale boat wasn’t heading to shore anyway, it was a quick excursion to see the sights. They sailed for about an hour – never far from the shoals.

But the weather did look a bit threatening. Miles decided to bring the boat in just as a steamer was pulling into the dock at Appledore. As he turned the boat, the passengers instinctively leaned starboard to get a better look at the steamer and to counterweight the vessel. A sudden gust grabbed the sail and the boat overturned, capsizing and sinking in minutes. None of the passengers were wearing life vests and few could swim. The two boys, both of whom were Harvard students working as head waiters for the summer, tried to rescue the girls, but only succeeded in tiring themselves out. Even though the boat was only 200 feet from the island, the breaking waves made rescue difficult. Oliver Adams watched in horror from Appledore Island. His sister, Eva had been onboard. He quickly launched a dory with his friend Lemuel Davis. Together, in spite of the hard surf, they managed to drag two of the girls to shore. One, Davis’ sister Eva, could not be resuscitated, but the other, Alice Haggerty, did survive.

The tragedy was grim. “Awful Calamity – Terrible Tragedy off the Shoals” headlined the Exeter News-Letter. Only two of the party and the captain survived the capsized boat. Fred Miles returned to Portsmouth a broken man.

Laura Gilmore of Prescott Street in Exeter did not survive. The large Gilmore family in Exeter received the news the following day, as reported in The Union, on July 19th: “No intimation of the accident had reached the family of Miss Laura Belle Gilmore until then, and it was heart-breaking news for the father and mother, the brothers had entered upon their day’s work before friends broke to them the sad tidings. The suddenness of it all was a crushing blow to the family and the friends and there was an outpouring of universal sympathy to the relatives.” Harriet, who had also decided not to take the boat ride, arrived home on the noon train. Her brothers went to Portsmouth to make arrangements to bring Laura home to Exeter.

The sinking was ruled to be an accident, although there were those who blamed Fred Miles and those who blamed the girls for leaning over the side of the boat. Over one hundred years since then, Laura Gilmore’s family still remembers her – her grand-nephew Leslie Cooper brought us her story so we would place her into Exeter’s history.