This "Historically Speaking" column was published in the Exeter News-Letter on Friday, January 5, 2018.

“A momentous year has passed into history,” John Templeton observed summing up 1917. The nation’s entry into World War I – then called the ‘Great War’- dominated the news that year. Templeton, the long-time editor of the Exeter News-Letter, added, “we were drawn into the great war with results that have already powerfully affected our national, business and private life and are likely to affect them in directions and to degrees that cannot now be foreseen.” Concerns about food and fuel were a lingering backdrop to events in town. Still, life went on in Exeter and there were a few bits of local news to keep everyone awake. 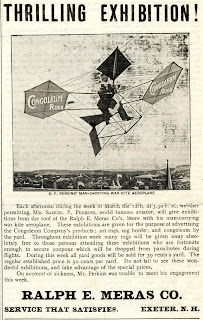 In March, the News-Letter excited townsfolk with the announcement that Samuel Perkins, a famous balloonist, would be in town to demonstrate his ‘Man Carrying Kite.’ Perkins, an MIT graduate, had been in talks with the US Signal Corps to use his kite system for battlefield surveillance. By 1917, however, it became apparent that Perkins’ rigs suffered frequent mishaps (like Charlie Brown, his kites were prone to broken strings, unfavorable air currents and the odd kite eating tree). Airplanes and balloons were more practical on the battlefield. Perkins paid the bills by giving exhibitions with a sponsor. In Exeter, he was promoting Congoleum rugs for Meras Furniture. “Beginning next Monday Mr. Perkins will operate his man carrying kites in thrilling demonstrations from the roof of the Meras store every afternoon at 3:30, weather permitting.” Whether these ‘demonstrations’ actually occurred is questionable. Mr. Perkins delayed for a week due to illness, the News-Letter offers no follow-up and we have no eye witness accounts.

The Ioka Theater, which had been in dire financial straits for nearly two years, was sold in foreclosure on June 10th. The buyer was Ralph Pratt of Newburyport, who paid $20,200. Pratt also controlled the Exeter Opera House, which he intended to close in favor of the Ioka.

The Fourth of July had traditionally been a noisy and disruptive free-for-all. But in 1917, perhaps due to the sobering times, the News-Letter was able to report: “Never has the Fourth in Exeter been so quiet and orderly as this year, the sale and use of fireworks and pistols having been prohibited. The quiet was much to the liking of older residents.”

August brought another promotional visit to town – the Pacific Coast Borax Company 20 mule team. Unlike the man carrying kite, we can be certain they arrived in town. The paper reported, “The train comprised two huge wagons, a wagon tank and a trailing wagon for miscellaneous supplies, the 20 mules, harnessed in pairs, each equipped with bells. The wagon train made a round of principal streets. It spent Wednesday night in Exeter, the wagons placed at the side of the Square and the mules tethered in the Stephen M. Towle yard.” The summer’s heat was oppressive – topping 92 degrees the day before the mules arrived. “In journeyings through the South its men encountered no heat so oppressive as that of this week in New Hampshire.” Betty Tufts noted in her diary that, “the 20 mule team borax team came to town. E & Francis went down to see them, at Jim’s suggestion.”

The summer came to a close with a spectacular light show courtesy of the aurora borealis. On August 17th, the paper reported, “the phenomenon became visible and began to affect telegraph and telephone wires just before midnight Wednesday night, and for several hours before daylight many trunk line circuits were useless most of the time.” Two weeks later, “there was a remarkably fine display of the northern lights Saturday evening. For more than an hour in the northwest bands of white flashed from the horizon to the zenith and to the northeast the sky had a reddish tint was from the glare of a distant fire.”

The local Red Cross held a successful rummage sale in November at the Town Hall. “contributions of clothing of every description, jewelry, silverware, etc., vegetables, canned goods, pictures and other articles in great variety had been most liberal, and the Town Hall was none too large for their display. The sale attracted more than local interest and was enjoyable from a social viewpoint.”

Like 2017, 1917 ended with a hard freeze. “The temperature steadily dropped during Saturday (December 29th) and the night was the coldest in many years, day break temperatures ranging from 18 below. At no time since Saturday has the temperature risen above 15 degrees and it has generally ranged around zero. Mishaps to plumbing and heating systems have ranged from slight to the bursting of pipes, radiators and water fronts of stoves. Plumbers have been busied and are still beset by calls.”

During the freeze, word reached town that the Coast Artillery Company, which left Exeter in July, had safely reached France. Templeton wondered, “What has the opening year in store for us? It will doubtless tax our resources, our energies, and our determination. May we fully respond to all its demands.” 1918 would bring more freezing temperatures and a coal shortage, Spanish Influenza would stalk the town and the armistice would find citizens dancing in the town Square. Exeter would fully respond to all these demands.

Image: March 9, 1917 advertisement for Samuel Perkins and his amazing Man Carrying Kite. Promoting Congoleum rugs, it is questionable whether Perkins ever made it to Exeter.
Email Post