This "Historically Speaking" column originally appeared in the Exeter News-Letter on Nov. 28, 2008 and was reprinted, November 24, 2017. 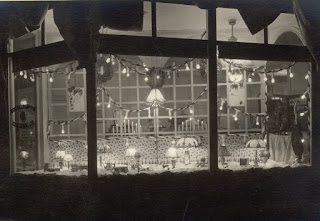 Arguments that Christmas has become too secular and that the shopping season has become too long are nothing new. People have been griping about Christmas for centuries. How did a religious holiday incur this much ire? In New England, it all goes back to the Puritans.

Our Puritan founders rightly noted that the birth of Christ has no calendar date in the Bible. The arbitrary date of December 25th was viewed as an adaptation to pagan solstice celebrations and therefore could not be celebrated by true Christians in any way. The truly pious stayed home and worked on the farm on Christmas Day. For the merchants in town, this really put a damper on the holiday shopping season. It took decades before they were able to sell the local population on the idea of Christmas presents.

As the holiday caught on, encouraged by the influx of Catholic factory workers who held Christmas quite dear, shopkeepers began to advertise their seasonal goods. But to avoid offending their more Puritanical customers, the word “Christmas” was rarely used. “Choice and rare fancy goods adapted to the Holiday Season,” advertised Merrill’s Drugstore in 1870. “If you wish to assist in making everyone merry and happy, select your Holiday presents from this large stock of books, fancy goods and toys,” urged Lane’s Bookstore. Even William Hobbs, Exeter’s preeminent photographer, reminded people that, “A good picture is among the most welcome of Holiday gifts.” Perhaps the pious could be talked into buying gifts for the New Year. Just don’t say “Christmas.”

It took until the first decades of the twentieth century for store owners to finally use “Christmas” with any degree of comfort. By that time, most of the area churches were holding services and celebrations of some sort on December 25th, and the kick-off for the Christmas shopping season was Thanksgiving.

Every Exeter News-Letter since about 1910 has a large advertising section that begins the day after Thanksgiving. To their credit, the merchants always waited until Thanksgiving was over and the dishes were washed before running their blow-out ads. “TOY LAND IS IN THE BASEMENT! Everything to make children happy and keep good little boys and girls interestingly amused will be found here in Toy Land.”

In 1939, with the depression looming over the holiday season, President Franklin Roosevelt decided to move Thanksgiving forward a week to extend the number of shopping days. Although Thanksgiving had been a floating holiday with no fixed date, it was usually celebrated on the last Thursday in November. The president’s Thanksgiving proclamation was issued annually, so there was no law requiring it to fall on any specific date. But tradition is tradition and people were unhappy with the move. For the individual states, the proclamation was non-binding. Exeter responded by noting, with some annoyance, that the post office would be closed on the federal holiday, but the schools would remain in session. The president may have carved his turkey on November 23, 1939, but Exeter residents carved theirs on November 30th. The same rebellion happened the following year.

“In the battle of the holidays – Thanksgiving defending itself against Franksgiving (as the new date was derisively called) – Governor Saltonstall made a most palpable hit when he remarked that the festival of Thanksgiving was instituted to give thanks to providence for mercies received, not to usher in a period of Christmas shopping,” noted News-Letter editor John Templeton.

A year later, Congress passed a law requiring that Thanksgiving be fixed on the fourth Thursday in November. Now, if only we could fix the shopping season as well.

Image: A Christmas display in a storefront in downtown Exeter, in the 1930s.
Email Post