Exeter's Witness to the Great War

This "Historically Speaking" column appeared in the Exeter News-Letter on Friday, May 26, 2017. 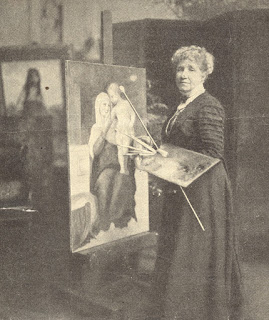 Exeter artist, Elizabeth Gardner, had been living in Paris since 1864 at the time the United States entered the First World War in 1917. She’d left America to study in the great salons while still in her twenties. When the war broke out in France in August of 1914, she’d been at a summer cottage outside the city. Now 77 years old, she was a well-respected painter and the widow of artist William Adolph Bouguereau. Madame Bouguereau remained in France for the duration of the war, keeping up with her relatives in Exeter through lively correspondence. In this way, Exeter had a direct line of information on the conditions in France.

Early on, in 1915 before American involvement, Elizabeth Gardner Bouguereau had written to the Exeter News-Letter to report, “the tragical scenes among which I have been living for the last eight months, and the very heavy correspondence with which the complications of this cruel war have burdened me have forced me to neglect writing to my family and other dear friends at home as I ought to have done,” but this contradicts the frequent letters she sent to her nephew, Perley, and sister Miriam.

Having already weathered the American Civil War and the Franco-Prussian War, Bouguereau was acquainted with the trials and travails of civilians during wartime. Shortages of coal were problematic. “As all the coal mines in the north of France and in Belgium are cut off, we depend on England, where the supply is sufficient, but the quality is inferior,” she wrote in 1915. Shrewd New Englander that she was, Elizabeth managed to keep herself warm during all the winters of the war – and there would be four long cold winters – by buying her coal in the summer when prices were lower. She had a fine six story house in Paris and a studio nearby. In 1918, writing to Perley, “I have decided not to heat my big handsome atelier this season, not only because it would oblige me to replenish my coal-cellar before Spring, but the weather is so dark every day that painting any delicate work, which is always my ambition, is quite impossible.”

Just before America entered the war, Perley received a letter that, although meant to reassure him that his Aunt was all right, had this entry about zeppelin raids on the city: “Last Friday morning, at 4:15 o’clock, I was aroused from a sound sleep by a loud alarm from fire-engines, using the sirene lately invented to warn people in case of the approach of the enemy. I jumped up, but finding the atmosphere of my sleeping room chilly as compared with my warm bed I returned to the comfort of my blankets. The alarm not being repeated I decided to keep quiet and my maid who is always on hand in case of disturbance, advised me there was no need to dress. The Zeppelin which was near Paris was immediately attacked by more than 20 French airships, and aimed at by the monster cannon recently constructed. It was the latter which set fire to the Zeppelin and brought it in flames at Compiegne, a small town, about an hour’s distance from Paris. All the German pilots were burned to death, and 2 other Zeppelins took to their heels in flight. I was delighted that French arms destroyed the enemy and that the almost instantaneous appearance of our airships showed that we are well protected night and day.”

In spite of the danger, Bouguereau remained in France. Perhaps she felt safer there – well away from the actual battlefield – than she might have attempting to cross the Atlantic, which was a perilous voyage given the submarine attacks. Her letters make note of bread rationing and limits on sugar and she frequently mentions how her cook was forced to wait in long lines for food. Potatoes became so, “dear and rare I asked a woman who has a little field at Saint Cloud to send me some. She arrived at the railway station in Paris all right, but on dismounting was hailed by an inquisitive policeman who inquired what she had. On her replying he said, ‘I thought so. I confiscate the lot for military service.’ So he paid a meagre sum and took possession of the lot.”

She reacted with cautious joy when the United States entered the war. Wishing to display some patriotic enthusiasm for her native country, she inquired, “What is our national hymn? Is it ‘America’ or the ‘Star Spangled Banner?’ I hear no military music, much to my regret, but at the frequent celebrations lately the journalists announce that ‘the bands played the American National Hymn, and that the enthusiastic crowds sung lustily the words.’ The ‘Star Spangled Banner’ is too complicated for French ears and tongues, their pronunciation would be ludicrous were it not for the solemnity of the actual, tragic circumstances.”

In the Summer of 1918, Bouguereau retreated to a cottage outside the city and remained there for the duration of the war. The threat of a direct attack on Paris kept her away, and most likely saved her from the flu epidemic ravaging the city. After the armistice, she returned to her studio and her painting, living her lively artistic life to its fullest until her death in 1922.

Picture: Elizabeth Gardner Bouguereau (1837 – 1922) in her studio in Paris just before the outbreak of World War I.
Email Post