This "Historically Speaking" column appeared in the Exeter News-Letter on Friday, April 14, 2017.

“The Civil War began and ended in April, a month otherwise marked by momentous events,” wrote Exeter News-Letter editor John Templeton. “That of this year will be memorable. Congress re-assembles next week, and war with Germany, long averted in the face of repeated provocation, is likely to be declared.” When he published these words on March 30th, 1917, Templeton was fairly certain where events would lead. President Wilson had already severed diplomatic ties with Germany months earlier. Three days later, the man who ran for reelection with the slogan, “He kept us out of war” would ask Congress for a declaration of war. Templeton urged caution. “We should not, however, go into a delirium of patriotism, which may easily be misdirected, and there are fads and movements which should be checked in incipiency.” On Sunday, April 5th, 21 year-old Betty Tufts scrawled across the top of her diary page, “WAR! Horrible!” Exeter, and the United States, had entered the long avoided World War.

Though the declaration was not unexpected, it brought with it a sense of urgency. Phillips Exeter Academy had already come face to face with the grim reality of modern warfare. Three graduates, Florence Price, Henry Butters and Henry Suckley, had fallen in battle before the United States entered the war, having joined Canadian and British service units. Calls for men went out and Congress passed the Selective Service Act in May to implement the draft. The factories in town issued a reassurance, “Men working in Exeter factories, who enlist in the local company of coast artillery, are not liable to lose their places in the factories in case they are called to serve in the United States army.”

For people at home, there were numerous concerns. “The Committee on Food Production has secured several tracts of land in different part of the town for the free use of citizens who have not sufficient land at their disposal for raising at least a family supply of vegetables,” noted the News-Letter. During the ensuing months, people would be encouraged to conserve foodstuffs, but rationing was never introduced. The real problem was unanticipated – coal shortages in the winter of 1917-18 would force many people in town to turn to firewood. In the two years following the war, chimney fires spiked in town as the lingering creosote unexpectedly caught flame. 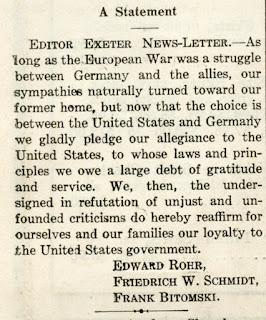 Exeter in 1917 had a foreign born population of nearly 20%. Loyalty became a simmering unspoken concern, particularly since the Chief of Police reminded all resident aliens to register and surrender firearms and weapons. “At the same time, it does not mean that subjects of Germany, if there are any here, will be treated with any unnecessary harshness. Above all, we must remember that most, if not all, of the Germans in our community are as loyal and patriotic citizens as we who were ‘always born here,’” reminded the editor. Although the comforting words of support were issued, the same edition of the News-Letter carried a notice, “We, then, the undersigned in refutation of unjust and unfounded criticisms do hereby reaffirm for ourselves and our families our loyalty to the United States Government. Signed, Edward Rohr, Friedrich W. Schmidt, Frank Bitomski.” Exeter, not being directly on the coast, was largely immune to the fear of invasion. But memories of the 1915 Vanceboro, Maine bridge bombing haunted many people. Owing to America’s neutrality the bridge linking Maine to St. Croix, Quebec, could not be used to ship arms. It became a target when Maine transported carloads of potatoes to feed the Canadian and British armies. A German operative named Werner Horn ineptly attempted to blow up the bridge at 1AM on February 2nd. That he had traveled with a bag full of explosives from Boston – passing through Exeter on the B & M – unnerved residents. It was no surprise to most when it was announced shortly after war was declared that, “Troops of the Sixth Massachusetts, a Negro regiment, are now stationed at bridges and other points along the Boston & Maine between Exeter and the Maine line. There being no quarters conveniently near the bridge across Exeter River, the four soldiers assigned to that post did not go on duty until yesterday, a building for their occupancy having meanwhile been erected.” If the sight of Black soldiers on duty in Exeter was a curiosity for residents, the News-Letter reminded them, “These troops are not stationed for show and their challenges or orders should be heeded.”

Quickly, the town snapped into action. The Red Cross, only newly organized in town, began a sewing committee to make hospital garments and bandages. Knitters were recruited – never underestimate the power and need for knitters. “An urgent appeal for knitted articles for the United States Navy has been received. Will anyone willing to knit for our own sailors please communicate with Miss Grouard, 12 Lincoln Street.” Phillips Exeter Academy’s battalion marched down Front Street, reviewed by Principal Lewis Perry on May 25, 1917. “It was headed by a bicycle corps recently organized for patrol work,” reported the News-Letter. Exeter formed a home guard to “go wherever it may be needed” in the name of home defense.

The early months of the war were thus occupied with organization and a shifting of the isolationist mindset that most Americans had harbored. The shift happened quickly. Within a day of the declaration, the Exeter News-Letter published this: “An Inspiring Sight: Loyalty to the country is plainly shown by the display of stars and stripes in the stitching room of Gale Brothers. Between 75 and 100 flags of all sizes are suspended from every conceivable place. The effect is indeed inspiring. Mrs. Norman McDougal, the forewoman, and nearly if not all of her employees, regardless of nationality, stand ready to uphold the principles which our flag represents. Mothers, wives, sweethearts and sisters with tear dimmed eyes and aching hearts will, if they must, bid the men and boys God speed at the sound of the bugle call.” The pain and heartbreak of war would arrive in the following months as the reality of war came home in caskets.

Image: After the United States entered World War I on April 6, 1917, several of Exeter’s German-born businessmen took out this advertisement in the Exeter News-Letter to reassure residents of their loyalty.

Barbara Rimkunas is curator of the Exeter Historical Society. Her column appears every other Friday and she may be reached at info@exeterhistory.org. She’ll be following the 100th commemoration of World War I and Exeter’s response in the upcoming year.
Email Post