This "Historically Speaking" column appeared in the Exeter News-Letter on Friday, March 17, 2017.

“We are of the people that were coaxed and induced to leave their farms along the Saint Lawrence to come here to New England to work in the textile mills and at brick making, to labor and sweat at starvation wages and to live in the cheap tenement houses that were owned by the corporation that we worked and slaved for.” Sam Cote’s family left Ile Verte, Quebec in 1888 when he was a young boy of about four years old. They settled first in Amesbury, Massachusetts to work in the textile mills. “I was one of a family of thirteen children, ten boys and three girls and we were all good steady workers.”

Cote’s experience was similar to many French Canadian families in the late nineteenth century. Farmers in Quebec found themselves unable to support their growing families. The industrial cities of New England promised steady wages. It may seem like it was a poor trade, but the promise of America beckoned many hard-off farmers. Often, as in the case of the Cotes, other family members had arrived first and perhaps because they missed their kin, wrote glowing letters home.

Young Sam Cote’s education is a bit of a mystery. He’s often described as someone who had only a third grade education, but he himself wrote, “School days were not as important then as they are today. We were all looking forward to the day that we would be allowed to go to work. Fourteen years of age was the time that we could go to work. The cotton mills was where we all took our apprenticeship in our journey through life.”

By the time he reached adulthood, Cote had moved to Exeter and was working in the shoe factory on Front Street. In 1909, he married Margaret Richard – a fellow shoe worker. Together they purchased a house on Washington Street and raised five children.

There is an added element of Sam Cote’s immigrant story – when he wasn’t lasting shoes and waiting for the slow factory clock to tick the time away, Sam Cote thought of himself as an artist. He sculpted animals out of scraps of wood and canvas. His granddaughter, Margaret, recalled, “as soon as the snow fell, he was outside, building snow figures. Every year he rendered his own version of Venus in front of the house. His interpretation turned out to be a positively buxom nude, thrusting her charms into the street. My mother recalls the year they awoke to find the ‘lady’ in a full set of underwear which she had acquired in the night.”

He sang continuously – sometimes the Irish songs he remembered from his boyhood in Massachusetts – but more often songs he composed himself. A self-taught piano player, he delighted his children and grandchildren with his pieces, although his grandson, Peter, remembers the tunes as being quite similar. “He played a kind of pounding marching tune, like he only knew one and just put different words to it.” The words to his songs came from the poems he wrote. Considering English was his second language and his education was spotty, his inner drive to express himself in verse is remarkable. 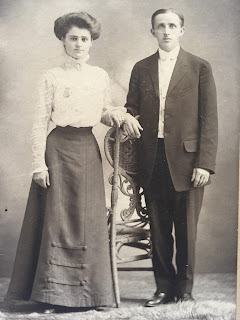 His family says there are over 5000 poems handwritten or meticulously typed. Margaret wrote that when he was courting his future wife, also named Margaret, “the first love note she received was sealed with a shoe sole tack from his workbench at the factory.” Sam himself said, “there is no subject that escapes the notice of a true poet.” Nothing escaped the notice of Sam Cote. He wrote verses on politics as an unrepentant liberal. He wrote about skunks, cigarettes, poker, girls, the moon, non-functioning plumbing, elm trees, Geritol, patriotism, local elections, war, bedpans and his love of his bicycle. At every family event he would pull out a poem to the delight of some, and the exasperation of others. Fiercely patriotic, he took on anything that he felt was an insult to the United States. He had no patience for McCarthyism and great contempt for William Loeb, the editor of the Union Leader. His poems made their way to the pages of the Exeter News-Letter, often as letters to the editor.

Recently, a scrapbook of Sam Cote’s poems made its way from the Exeter Public Library to the Exeter Historical Society. In it, Cote pasted his published poems and handwrote others. One of our favorites is “The Lasting Room Clock,” a shoe workers lament on the passing of time. It ends,

Sam Cote’s words are now part of our town’s history. An immigrant shoe worker’s poems now help us interpret the tumultuous times he lived through – two world wars, a presidential assassination, labor strikes, the rise of communism, wars in Korea and Vietnam and the sighting of a UFO in Exeter. All of these were addressed by a humble poet.

Image: Margaret and Sam Cote in 1909, the year they were married in Exeter. Sam was a shoe worker by trade, working in the lasting room, but his artistic expressions made him a local legend.
Email Post

Maggie Mehaffey said…
Thank you so much for this lovely article. I am Sam Cote's youngest granddaughter Margaret, and my memories of him are so vivid. My grandfather was the most gentle, loving, life affirming, and fun person, and I'd like to think I carry some of him in me. It was exciting to be at his elbow, usually crowded with the other children of the family as he thundered tunes on the piano. And always, maybe as a reward for our attention, we were given a lint covered Canada mint, from the depths of his pocket. A couple of stories from family lore: When his first car wore out, a Model T, he took it completely apart, dug a huge pit, and buried it in the backyard.
He was a familiar sight well into his 80s, pedaling around town on his bicycle. Once, Nana gave him the money for a haircut, but instead, he pedaled over to our house, where my father persuaded him to use the money instead to buy a salami and a couple of beers. While they enjoyed their treat, my dad gave him his first "buzz" cut, which he continued to received from my dad for the rest of his life!
March 17, 2017 at 8:15 AM