This "Historically Speaking" column appeared in the Exeter News-Letter on January 27, 2017.

On a cold, foggy January night in 1930, residents in the western part of Exeter were jarred awake by a thunderous crash. Two freight trains, one headed for Ayer, Massachusetts, and the other for Worcester, had collided on the tracks near the Powder Mill road crossing. The archives at the Exeter Historical Society do not have any photos of the wreck, but there are two accounts of the accident.

The Exeter News-Letter dashed off a quick account of the accident a day after it occurred. “A locomotive and 16 cars were derailed, wrecked and strewn promiscuously around the road bed, blocking both tracks. Fortunately there was no loss of life or serious injury to any of the train crews,” it reported. “Just how the accident happened cannot be ascertained and, from the protection afforded by the block system and by rear brakemen, it seems unaccountable.” In 1990, some of the mystery was cleared up when the reminiscences of Arthur Eugley Jr. of Exeter were published in an article titled, “Two Incidents at Exeter,” in the B & M Bulletin. “This altercation involved two freight trains, the first of which stalled on the upgrade in poor visibility. The second train, meanwhile, came along and ran by a red signal, proceeding to ram into the caboose and rear end of the first. The impact was terrific as the second train was making a ‘run for the hill.’” The News-Letter added the detail that, “Much of the wreckage soon caught fire,” but this isn’t mentioned by Eugley. Exeter Fire Department records indicate that there was no call placed that night, so the fire may have been just a rumor. Eugley added, “Both tracks were blocked for two days, with detours being made over the Eastern division through Hampton and Portsmouth, NH, which was still a through route from Portland to Boston at that time.”

The tracks had been upgraded during the previous year to accommodate larger engines, but the force of the collision was enough to rip 75 yards of track to be ripped off the ties. A week later the News-Letter reported, “the train wreck continued to be a Mecca of attraction over the week-end and was visited by hundreds, who watched with interest the operations of the wrecking crews. Sunday saw the wrecked locomotive removed and both tracks in commission.” Still, the clean-up was completed in just four days, which is pretty impressive considering Eugley said of the locomotive, “getting this baby back on the iron really took some doing, as it weighed over 300 tons and was more than 100 feet in length.” 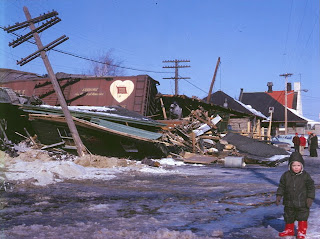 The other January rail accident Eugley recalled happened in 1966, so there are probably many current residents who remember it. The weather had been brutally cold. At about 5:45pm on Tuesday, January 11th, when most people were sitting down to dinner, “the crash sounded like the sonic boom of a jet aircraft, and the subsequent screeching of metal indicated that it was not an aircraft.” The Exeter News-Letter reported that, “A broken wheel was given as the cause of a spectacular freight train wreck, shortly before 6 pm Tuesday, which demolished the Railway Express Agency building in a 17-car pileup.” Like the wreck in 1930, the damage was extensive but no injuries were reported, although “Joseph Mantegani, the Railway Express agent, escaped certain death when he left the building but a few minutes before the long train came speeding down the eastbound track at 50 miles an hour.” Mantegani had decided to leave the office a bit early to visit his wife in the hospital. The decision likely saved his life.

More pressing, however, was the danger of the wreck itself. There were three propane tankers involved – one of which was overturned. This time, the fire department records agree with the newspaper accounts. “Box 29 sounded for train wreck near old depot. 17 cars derailed. Railway Express office destroyed when 3 cars crashed into building. 1 car of propane gas rolled over on its side, water was sprayed over tank car of propane gas until it was determined there were no leaks. Engine 4 and Crew remained at scene until 8:00am.” Also in the record, the chilling note: “temp: 4 above.” Thankfully, the propane did not ignite. The 49 cars north of the depot were moved on to Portland and the 70 or so that were south of the wreck were brought back to Lawrence, Massachusetts. Eugley mentions the derailed cars, “5 containing rock salt, 3 with soy meal, 1 carrying propane gas, 1 empty and 7 loaded with coal.” He added, “For over a week, the depot area was an interesting place to visit, and a good many extra cups of coffee were served at Gerry’s Restaurant to warm up the cold bodies of the sightseers.”

There was some discussion about whether freight trains should be barreling through town at 50 mph in the first place – particularly when carrying potentially explosive cargo. A flurry of meetings were held with the Boston and Maine and Public Utilities Commission to lower the in town speeds to 30 mph. There was no need, it seemed, to rush through densely populated areas. All the same, Exeter had dodged a bullet. The News-Letter reporting that, “the firemen and the police watched the area all night, principally to guard against an explosion which, with the nearness of the large tanks of the Dining Oil Co. could have laid waste, said Chief Toland, ‘to a large section of town.’ When asked to be more specific, the chief explained that the explosive force of the three tank cars and the storage tanks in the fuel depot nearby could damage virtually all property within a one-mile radius.” It was, as nearby resident Betty Kreger noted in her diary, an “awful mess at the depot.”

Image: Young Sargent Kennedy poses next to the remains of the Railroad Express office at the Lincoln Street depot the morning after a derailment. (Photo courtesy of Frank Kennedy).
Email Post