This "Historically Speaking" column was published by the Exeter News-Letter on October 7, 2016.

In September of 1925, President Calvin Coolidge issued a proclamation to observe National Fire Prevention Week. Citing the fire statistics from 1924, which indicated 15,000 deaths and property loss valued at $548,000,000.00, the proclamation declares, “This vast waste is incurred under conditions which cannot fail to arouse a sense of horror and shame, for our experience indicates a major portion of it is preventable.” Coolidge was spurred into action by the National Fire Protection Association, which had been pressing for national standards since the turn of the century. The NFPA has sponsored Fire Prevention Week ever since the proclamation was made.

The date for Fire Prevention Week was set as the week containing October 9th – to commemorate the Great Chicago Fire of 1871. That fire, which was still ripe in the minds of people in 1925, began late on the night of October 8th and burned until October 10th , killing at least 300 people. Legend always laid the blame on Mrs. O’Leary and her lantern-kicking cow, although she has since been exonerated by the City of Chicago. Scores of children knew the alternate lyrics to the tune A Hot Time in the Old Town Tonight : “Late last night when we were all in bed, Mrs. O’Leary hung the lantern in the shed, and when the cow kicked it over, she winked her eye and said, there’ll be a hot time in the old town tonight!” We should offer a posthumous apology to poor Catherine O’Leary. It’s a popular camp song to this day. 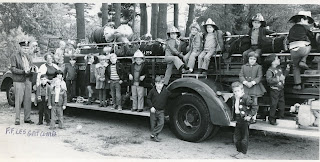 Although Fire Prevention Week is aimed at all ages, most of us remember it best from childhood. October is still early enough in the school year to make it practical for fire drills. The weather is still warm enough to enforce the, “Don’t stop to get your coat!” rule. The kids are still getting to know one another and their teachers, so compliance is easier. In 1935, it was still common for the governor to declare Fire Prevention Week. Was this actually necessary? The editor of the Exeter News-Letter thought not. In one stroke, Governor Winant signed proclamations for Fire Prevention Week, Casimir Pulaski Day and praise for Parent Teacher Associations. “If the state is to show its sympathy for every good cause by a proclamation in its favor, some other method should be devised to emphasize the supremacy of time-honored festivals, or of those important anniversaries of critical events in our history which no loyal citizen can disregard and still remain a loyal citizen.”

But think of the children. Every year the fire department got the chance to turn elementary school students into a little army of fire prevention soldiers. They were taught to clear out potential fire hazards like rubbish in the basement, to check the electric outlets for hazardous extension cords and to run beleaguered parents through home fire drills. Bolstering the lessons with filmstrip and movie presentations, the kids were thoroughly trained in the hazards of careless fires. The downside to this, of course, was that it fostered annual fire terror that, even if educationally sound, caused many sleepless nights. And adults were terrible role models for fire safety. They smoked cigarettes and cigars – leaving ash all over the place or flicking butts out car windows. Twenty or thirty years ago it was still considered okay to burn leaves in the street. “Watch this for a minute,” a neighbor once said to eight-year-old me, “I need to run inside to get another beer.” At any other time of year the pyromaniac in me would have loved to stand next to the burning leaves calmly raking them toward the smoldering center. But in October – after a week-long indoctrination from Sparky the Fire Dog – this was just way too much responsibility.

In the years leading up to World War II, the Fire Department in Exeter often didn’t have time to lecture classes on fire safety. In 1940, it was reported, “No talks were given in the public schools this week on fire prevention, but each had a fire drill.” Post war years, with their emphasis on Cold War civil defense, increased participation in Fire Prevention Week. Sparky the Fire Dog was created in 1951 as a mascot. Sparky’s counterpart was Smokey the Bear who intoned, “Only YOU can prevent forest fires.” With the encouragement of both, the Exeter Fire Department was able to report in 1968, that the school fire drills were a success. The high school’s 923 students evacuated the building in one minute and 20 seconds. The Junior High’s 680 students shaved 10 seconds off of that, and Lincoln Street School’s 600 elementary kids, perhaps because of their shorter legs, vacated the building in one minute and 45 seconds.

Home smoke detectors, which became common in the late 1970s, took some of the burden off of kids. They no longer had to lie awake sniffing the air for whiffs of smoke every few minutes. Today they’re still encouraged to check the house for fire hazards and practice home fire drills, but at least their only smoke related responsibility is to remind their parents to change the batteries in the smoke detector. This year, the NFPA would like to remind you that you should consider changing the entire smoke detector – they don’t last forever after all. “Don’t Wait, Check the Date” is the slogan to remind us that smoke detectors only last about 10 years. Take care of it, or Sparky the Fire dog will come growling at your door. Barbara Rimkunas is curator of the Exeter Historical Society. Her column appears every other Friday and she may be reached at info@exeterhistory.org.