When the Band Comes to Town

This "Historically Speaking" column was published by the Exeter News-Letter on June 17, 2016.

Mid-summer Mondays in Exeter find many townies comfortably settled into lawn chairs, maybe with ice cream, listening to the Exeter Brass Band. Our band was organized in 1847, but even though we’ve loved our band for over a century, it wasn’t always the only show in town. In the late nineteenth century, there were other more famous bands that gave Exeter a thrill. 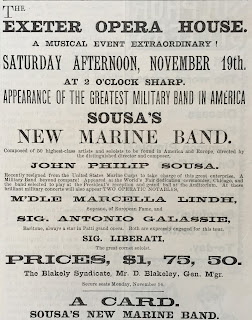 The first of the great bands was led by Patrick Gilmore, an Irish immigrant who is often credited as the “Father of the American Concert Band.” He arrived in Boston in 1849, at the age of 20 and quickly became a bandleader. During the Civil War he wrote, When Johnny Comes Marching Home Again under the pen name Louis Lambert. He led the Boston Brigade Band and the Salem Brass Band and established a Fourth of July concert on Boston Common that would rival the Pops at the Esplanade. According to the Boston College Burns Library, “Gilmore organized the National Peace Jubilee in 1869 to benefit the war widows and orphans of the Civil War, and to celebrate the peace of war’s end. A coliseum was specially built in Boston for the Jubilee, with seating for 30,000 audience members, 10,000 chorus members, and a 1,000 piece orchestra. Highlights from the festival included a performance of Verdi’s Il Trovatore, which included 100 Boston firemen striking anvils, a battery of cannon, chimes, church bells, a huge bass drum 8 feet in diameter, and a gigantic organ specially built for the occasion.”

Gilmore’s band came to town and played a matinee concert on January 27, 1888, at the Exeter Opera House. Nearly 300 people, mostly townspeople, attended the show. Gilmore introduced his players as the “Twenty-second Regiment Band of New York” but the music they played was not traditional marching band fare. “No music of the kind, at all approaching it for excellence, was ever before heard here,” commented the Exeter News-Letter. The selections were arrangements of classical pieces. Rossini’s Overture to Semiramide opened the program, with its beautiful French horn quartette. Harder to adapt, but with apparent success, was Rubinstein’s Valse Caprice, written for piano but, “its performance by Gilmore’s Band has widened the scope of its popularity by taking it out of the classic chamber, and playing it for the great majority,” as the program for the event explained. I was unable to find any recording of a stage band performing this piece, so we’ll have to take the word of the News-Letter that it was a success. “All were rendered with rare dash and with a perfection of harmony and time that completely entranced all hearers.” Gilmore saved his marches for the encores – of which there were many. On this occasion, it was not mentioned whether Gilmore played Hail! Columbia! - a brisk patriotic tune that he repeatedly campaigned to have declared the national anthem.

Gilmore’s popularity inspired other bandleaders, including John Philip Sousa, who would leave his long career with the U.S. Marine Corp band in 1892 to pursue touring with his own band. A musical prodigy, he’d been apprenticed with the U.S. Marine band at the tender age of 14. Gilmore didn’t live long enough to see Sousa’s band in concert, he died the same year the new band began a concert tour. In 1893, Sousa’s band was engaged to play at the World Columbian Exposition in Chicago. It was there that he played a piece he’d written for an unfinished stage show – the Liberty Bell March, now best known as the opening music to Monty Python. His band toured throughout the country and played in Exeter at least twice, in 1892 and 1894. Like Gilmore, he performed classical pieces adapted to the stage. His 1894 program included a finale of banjo music, hardly classical but very American. He also embraced his marches and included them in his main program as well as the encores. If he played the Liberty Bell March in Exeter we can assume it did not contain the raspberry and whoopee effects used in the Python series. His later work, The Stars and Stripes Forever, is far more popular today.

In 1896, Sousa related a tale from one of his Exeter concerts to the Concord Monitor. “When we reached the hall I found two juvenile residents of Exeter, who, by distributing handbills, had earned the privilege of hearing the concert from behind the scenes. The youngsters had some sort of quarrel, and when I came across them were making threatening demonstrations at the one another. I separated them, sat them down in two chairs and gave them a lecture on the sinfulness of fighting until it was time to go on the stage. From where I stood I could see the boys, each in his chair, out in the wings we began with one of Liszt’s Hungarian rhapsodies. First came a lively, rather martial allegro movement, and as the music proceeded the little fellows got out of their chairs, and sliding toward one another, took up the quarrel where they had left off. A collision was imminent, when the music ceased and a soothing andante movement followed. The boys resumed their chairs and listened quietly during this passage, even exchanging looks which I interpreted as conciliatory and repentant. Another allegro movement followed and the stage hands had to interfere to keep the youngsters from punching one another.” The pattern of behavior continued – fighting during the brisk numbers and calmly sitting when the music quieted. “The last I saw of them was the spectacle of their ejectment from the stage door, one of them stanching a profuse nasal hemorrhage, while the other nursed a badly blacked eye. It was the most forcible demonstration of the influence of music upon the human passions which I remember having seen.”

Image: an advertisement for a John Philip Sousa concert in Exeter at the Exeter Opera House in 1892.
Email Post