In Search of Elder Abner Jones

This "Historically Speaking" column was published by the Exeter News-Letter on November 20, 2015.

It’s hard to categorize Elder Abner Jones, except to say that he was a restless man. Exeter’s claim on his biography is as his final resting place. Like many Americans who matured after the Revolution, he was a seeker. Born in Royalton, Massachusetts, in 1772, his family moved to Vermont when he was eight. His father raised him in the strict Calvinist Puritanism of New England, but a series of early events in the wilderness of Vermont – an Indian raid, an infestation of crop-eating worms and a neighbor’s terrible hunting accident – rattled his faith. “Although I was only 8 or 9 years old, the pride of my heart was so great that I was ashamed to let anyone know that I felt concerned about my soul; neither could I bear to have any one see me crying; and so quenched the spirit of the Lord I now felt the need of religion more than ever I had before, I was fully convinced that I must be born again or be damned.” It would take years before Abner Jones found his way.

Jones was caught up in a period known as the Second Great Awakening. Baptist and Methodist revival meetings travelled throughout the region. Young Abner attended many, but his conscience remained unsettled. He taught school and worried about his soul. He accepted baptism in his late teens. As an adult, he became interested in herbalism and took a course to learn the medical practices of Samuel Thomson, an early practitioner of alternative medicine. 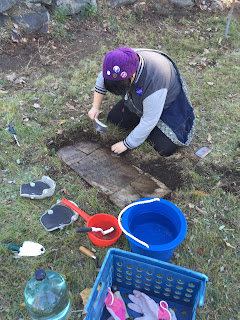 Conventional medical treatment in the early part of the 19th century was as harsh and unforgiving as strict Puritanism. The body was believed to contain bad humors, which as the cause of disease, needed to be removed by bleeding, purging and excision. Often the treatment was so severe that the patient died not because of the illness, but because of the ‘cure.’ Thomson, who had studied the backwoods treatments of non-medically educated practitioners, preferred to use natural remedies derived from plants. His theory held that disease was caused by cold and could be cured by heat. Like the other medical men of his day, he believed purging was one of the ways to rid the body of disease and used copious amounts of lobelia (sometimes called ‘puke weed’) and cayenne to induce vomiting while warming the body. This was followed with steam baths. The treatment was met with no small amount of objection from the medically trained doctors of the time, although patients tended to prefer it over conventional treatment. Sure, neither method actually cured patients, but at least Thompson didn’t bleed anyone to death.

Jones was convinced that Thompson’s theories were sound. As an added benefit, he wouldn’t need to attend lengthy and expensive medical school. Thompson didn’t worry his practitioners with a need for anatomy or surgical knowledge. Jones set up practice in Vermont as was a well- respected ‘doctor’ to his community. He married and warned his new wife that he may not remain a country doctor for long. He still had a lingering call to God that he could not ignore. When he wasn’t seeing patients, he studied the Bible and gradually began to reject many of the teachings he’d been taught as a child. As he began preaching, he saw fewer and fewer medical patients, until much to the distain of his wife, he let the practice go and became an itinerant preacher. “When I searched the New Testament through, to my great astonishment, I could not find the denomination of Baptist mentioned in the whole of it. Christ called his disciples brethren and friends. In the time of the apostles, the disciples were first called CHRISTIANS at Antioch. After this search, I denied the name of a Baptist, and so I have continued to do unto this day.”

Preaching in New Hampshire, Vermont and Massachusetts, Jones and others spread their ideas of a primitive Christianity. New Hampshire was agonizing over the dilemma of long-established theocracy – was there room for these new religious movements in a society that had legal rights determined by one’s denomination? The state passed the Toleration Act in 1819, removing parish taxes and freeing people to practice their own faith. This opened the door for movements like Jones’ Christian Connection. 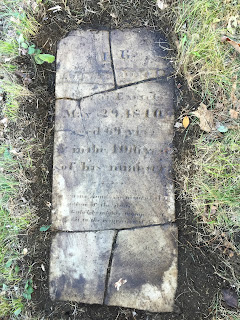 In 1840, after the death of his wife, Jones was living in Exeter on Maple Street – still not a settled minister because his faith required no such role – working as an itinerant preacher. He died there in 1841 and was buried in the now neglected Winter Street Cemetery alongside the town’s early citizens. His grave marker was still standing in 1938, but in recent years disappeared. Marilyn Easton, working for the Exeter Historical Society, managed to locate it in 1998. It had fallen and was badly cracked. Theology students often looked in vain for the stone hoping to find the final resting place of this restless man. We found it again in October and carefully excavated the stone. This time, the GPS coordinates were logged, but the stone is in such poor condition that it was felt best to simply leave it flat. The inscription reads, “This stone stands the mournful guardian of the day til Gabrial’s mighty army shall raise it to the Resurrection of the Dead.” Abner Jones is still waiting for that day to arrive.

Photos: A volunteer from the Exeter Historical Society excavates the grave marker of Elder Abner Jones. Jones, who died in 1841, was an important early church reformer in New England. He is buried in the Winter Street Cemetery in Exeter. Second photo: Current condition of Elder Abner Jones’ grave marker is poor. When excavated on October 10th, 2015, it was felt best to leave it flat. It’s location has now been logged with GPS coordinates to better find it in the future.
Email Post