When Did Playgrounds Become a Thing?

This "Historically Speaking" column was published in the Exeter News-Letter on Friday, August 28, 2015.

This summer’s improvement to the Main Street School playground prompts us to wonder how long playgrounds have been around. Children seem to have a playground RADAR system that can detect a swing set from a mile away. They can sense that these are places for them, and they are right about that. Playgrounds are designed and maintained for the use of children. Few communities would begrudge the youngsters this space even though in previous generations, playgrounds didn’t exist. 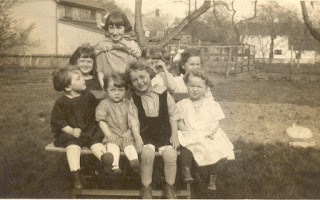 The idea that children needed activity and imaginative play began to evolve in the middle of the nineteenth century with the teachings of Frederick Froebel. Froebel, who founded the kindergarten movement, theorized that children are not lumps of unformed, unschooled mini-adults waiting for better self-control and education. Rather, children learned through active engagement with the environment. A great deal of education, it seemed, was going on before the little ones ever set foot in a school room. Children absorb massive amounts of information about the environment, gravity, physics and symmetry by hanging upside down from a tree singing “The Muffin Man” for hours. Perhaps this kind of active play should be encouraged and finding safe spaces for it was a bit of a challenge in a world that was becoming more urbanized.

The first community in the United States to purchase land for a public playground was Brookline, Massachusetts, in 1872. Boston installed a sand garden in 1887 and the playground movement took off. Exeter joined the playground movement in the summer of 1917. The town set up a fundraising campaign to build a supervised playground at Tuck High School on Linden Street. The budget for the project was set at $150. Donations quickly rolled in and the playground was built by local businesses and volunteers. Robinson Female Seminary graduate Marion Louise Tyler was hired as the playground supervisor. Her report in October, rated the experiment a success. “They enjoyed the swings very much, and also the see-saws and slide.” She kept the children busy, “some of the games they liked to play were croquet, volley ball, and quoits. The boys liked field hockey. The youngest children had a fine time in the sand pile.” The only downside to the new playground was the lack of shade. “If a place could be arranged where the children could go in bathing, it would be a fine thing, especially during the hot days in the summer.”

In the years that followed, the town became preoccupied amid coal shortages, war news and influenza fears. Funding for public play didn’t reappear until 1922, when the physical education movement in schools began to grow. As Charles H. Smith noted in his letter to the Exeter News-Letter in that year, “A country having 30% of its male citizens rejected as unfit for military service in its defense during the World War evidently needs physical education.”

Smith made a plea to modernize. “I have heard but one objection thus far, and that particular objector feels that because the children of past generations got along without playgrounds the children of this day will do very well without such ‘newfangled ideas.’” Remember this is 1922 he’s talking about. “Twenty-five years ago there were only four automobiles in this country. Today there are 10,000,000. Who among us would exchange the comfortable automobile for the ancient stage coach; the modern electric lamp for the flickering candle; the electric locomotive for the old wood-burning engine; the electric car for the horse-drawn conveyance or the electric motion picture for the old magic lantern? We are living in a new environment of man’s own creating. It has been my contention that physical education should be a part of the school programme in a larger way than at present, and that the playground is a necessary complement of the public school.”

Apparently the Exeter Playground Committee agreed with Smith. Funds were raised and playground equipment – the old favorite slides, swings, see-saws and sandboxes – were installed in the Tuck High School play area: “for the younger children, a capacious sand-pit, where they can grub and dig to their hearts’ content; for the larger youngster, maple bedway slides, plain strong swings, see-saw boards with handles, a giant stride, traveling ring outfits, climbing poles and steel ladders.” The following year, playground equipment was installed in school yards and public parks.

Today, parents and children can still visit Exeter’s playgrounds. A quick circuit this week found children and parents busily playing at Winter Street (often called “Purple Dinosaur” playground), Park Street and Planet Playground at the Rec Park. Children were happily climbing, swinging and sliding on equipment similar to the type installed back in 1917. Although children back then would have been puzzled by playground toys shaped like spaceships or dinosaurs, they would have happily known this was their space.

Photo: Playgrounds were an outgrowth of the physical education movement of the early 20th century when there was widespread concern that children, such as this group of pals on River Street in Exeter, were becoming ‘soft’ due to the easy living of a modern life without any difficult chores.
Email Post