This "Historically Speaking" column was published in the Exeter News-Letter on Friday, March 27, 2015. 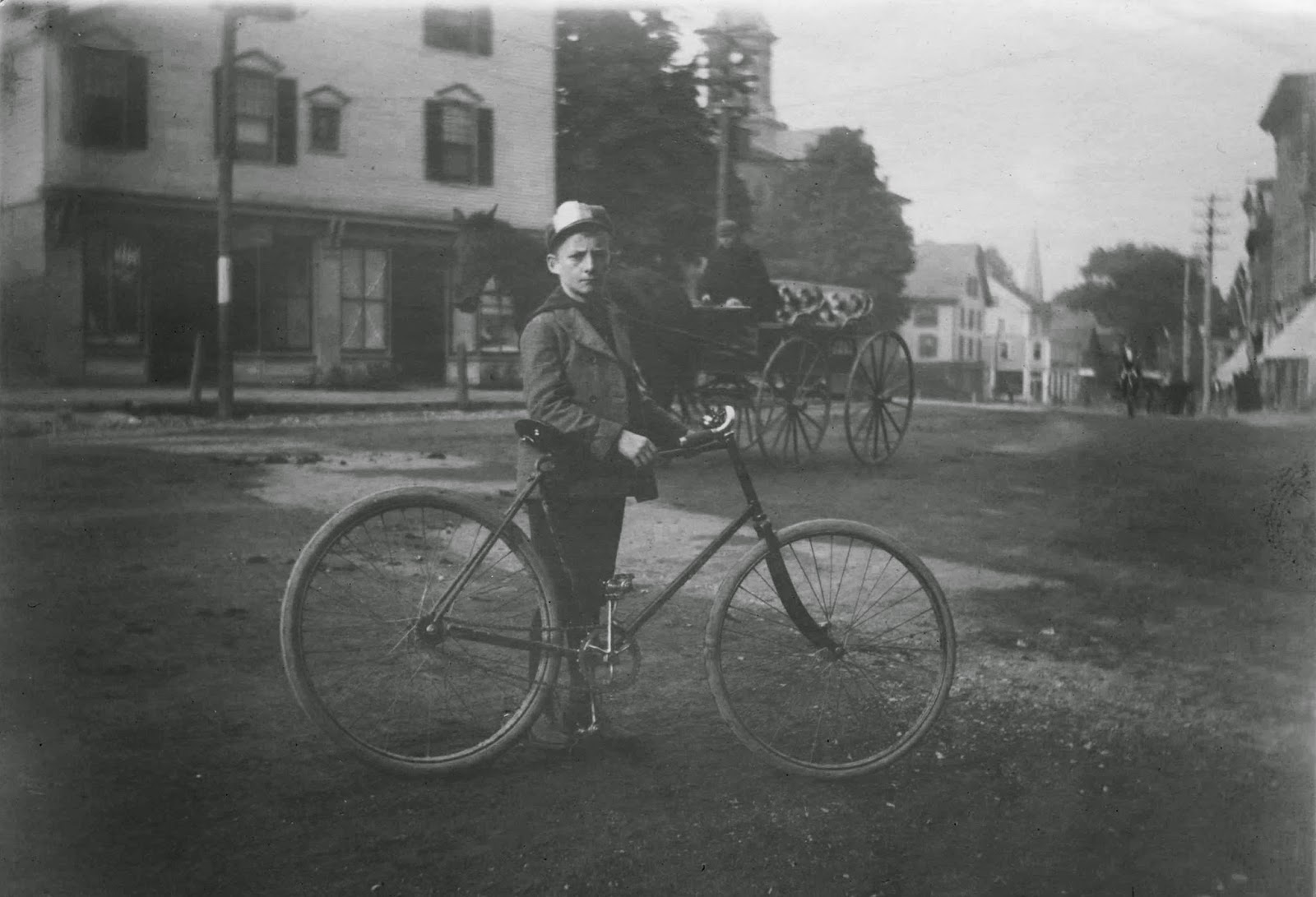 In the collections of the Exeter Historical Society is a photo labeled, “the only messenger boy in town!” In the picture, there is a young boy of maybe 12 or 13 standing gravely next to his bike on Water Street looking straight at the camera. We don’t know his name or much about the photo album which contains the picture. Most of the pictures involve the printing office of the Exeter Gazette and the railroad post office. Even the caption provides us with no hint – is there only one messenger boy in town, or is this the only reliable boy to call?

In large cities, Western Union – which became a telegraph monopoly by the late nineteenth century – regularly hired boys between the ages of 11 and 18 to run messages to customers. The job was frequently paid by the mile, so once bicycles became common in the 1890s, Western Union was one of their biggest customers. Boys paid a rental fee for the bike and another fee for their uniform. Often making a mere two cents per message, he could earn up to two dollars per week – not bad if he was living at home, but most city messenger boys lived in flop houses and wiled away their off hours reading penny dreadfuls and smoking unsavory cigarettes. Because of their poor habits, larger Western Union offices kept the boys well away from the public – often hiding them in a back room or basement.

Social reformers worried endlessly about messenger boys, while at the same time popular novels and stories hailed them as hard-working, self-employed, up and coming young businessmen. Horatio Alger Jr.’s rags to riches stories, such as Number 91: Tales of a New York Telegraph Boy gave these youngsters almost hero status. The image of a messenger boy on his bicycle became ubiquitous in the film industry. Receiving a telegraph carried thoughts of something unexpected happening – a birth, death or big announcement – and the messenger himself carried some importance.

But let’s not forget these were boys – often young boys – working long days. In Exeter, there were no big Western Union offices that offered the occasional meal and at least minimal schooling. By the turn of the century, children were required to be in school until reaching the age of 14, but the local telegraph office probably didn’t ask too many questions if a boy was on the tall side and willing to work. The boy in our picture has most likely provided his own bicycle – but unlike the city kids, he probably went home for meals and sleep. His down time was likely long and dull, similar to the pace of life in Exeter.

As telephones became popular in the 1920s, it would seem that the telegram and telegraph boys would have disappeared from the landscape, but the telephone was primarily for local use, communication from farther away still required the speed of the telegraph. In his book, Telegraph Messenger Boys: Labor, Technology and Geography, 1850-1950, Gregory Downey notes: “Messenger employment peaked around 1930 and began to drop off after World War II. With the increasing demand for the telegraph in the Roaring Twenties, the messenger’s employers managed to transform him into the much-advertised image of the smiling, uniformed, industrial soldier, ready to not only deliver a holiday telegram with a smile, but competent to carry out product surveys, to deliver direct-marketing samples and even to cover the office phones while the boss was away. And soon after World War II ended, a century after the first telegraph messenger appeared, finding any messenger image at all – save for a nostalgic one – was all but impossible.”

It was probably for the best. Boys at that age should be in school and not gallivanting recklessly around town on a bicycle. Our winsome little fellow would have been forgotten had it not been for someone – perhaps an employee of the Exeter Gazette – grateful enough of his quick delivery of news from the depot, who snapped his picture on dusty old Water Street one day.

Photo: An unknown messenger boy poses sometime in the 1890s on Water Street in Exeter. The Folsom Tavern can be seen behind him in its original location on the corner of Water and Front Street.
Email Post