This "Historically Speaking" column was published in the Exeter News-Letter on Friday, December 19, 2014. 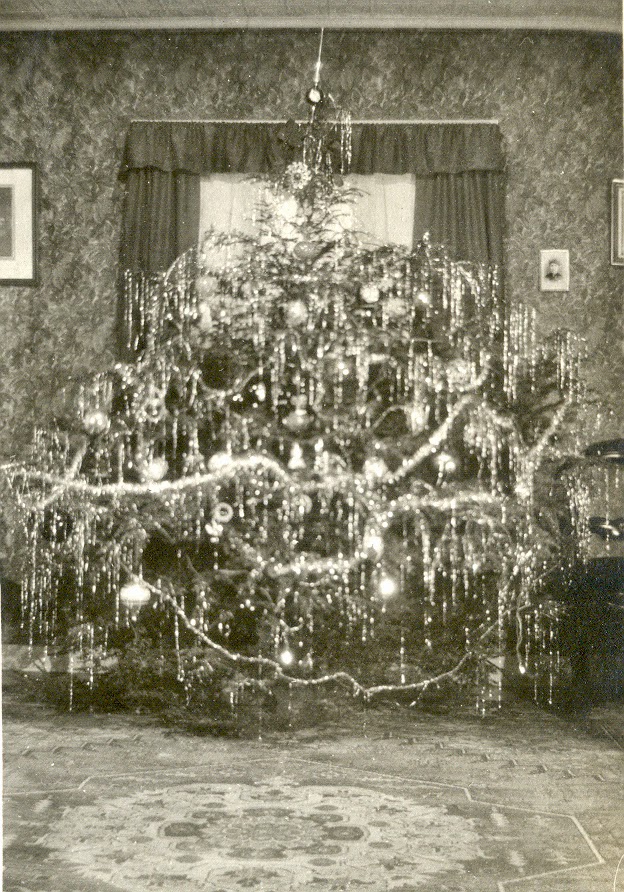 According to David Robson of the University of Illinois horticulture extension program, “By 1900, one in five American families had a Christmas tree, and 20 years later, the custom was nearly universal.” How do we account for the rise in popularity? Most likely, it was due to electricity. Christmas trees had gained a following after the 1848 publication of an engraving of Queen Victoria and her family gathered around a decorated tree. New Hampshire’s only president, Franklin Pierce, is credited with setting up the first Christmas tree in the White House in 1853.

Still, few people had a tree at home. Christmas trees were lit with candles – an obvious fire risk – and most families didn’t want to take that chance. It was more common for clubs and churches to ‘hold a Christmas tree’ as an event, rather than a decorative item. It would be lit for a short time only and accompanied by presents, which were often used as decorations on the tree itself. In 1912, the city of New York erected the first community Christmas tree – illuminated with electric lights.

Exeter took the plunge in 1916, with the assistance of Exeter and Hampton Electric Company and the Exeter Women’s Club. The Exeter News-Letter announced that the community tree would be lit on Christmas Eve, “if the weather is unsuitable Sunday evening, these exercises will be postponed until the first fair night. The church bells will be rung at 7 o’clock as a signal that the celebration will take place. The community chorus will be led by Mr. W.H. Nute, and the school chorus by Mr. Brooks.” In conjunction with this, a gift-tree for children was planned for December 26th, “this is the first community gift-tree ever held in Exeter. What can lighten the hearts of the children more than the giving of gifts to them at this holiday season?”

The review of the event reported, “the church bells rang at 7:15 o’clock Sunday evening as a signal that the exercises were to be held at 8 o’clock. A bugle call opened the evening’s programme.” The wait was not appreciated by Helen Tufts, who wryly wrote in her diary, “went down to the community tree and stood around over half an hour for it to begin. It was not a grand success,” although she noted, “singing in the pavilion led by Mr. Nute, was fine.”

The thrilling part of the event had to be the brilliantly lit tree. “The lighting of the tree, which was illuminated with 500 red and green electric lights, with a white star in the top outlined with electric lights, was generously given by Mr. George D. Baxter.” Baxter served as the manager of Exeter and Hampton Electric for 30 years. Promoting the use of home electricity was still important in 1916, when many families still weren’t wired up. “Mr. Baxter,” the News-Letter continued, “has spent much time and labor in enabling the committee to make the first community tree a success. A large number of townspeople as well as many from neighboring towns attended the evening’s programme.” The tree was lit from Christmas Eve to New Year’s Eve – a relatively short time period by today’s standards, but tremendously long for those accustomed to candle-lit trees.

After Christmas, the gift-tree was held for local children. “The Community gift-tree was held in the Town Hall Tuesday afternoon. A Christmas programme for the children preceded the distribution of gifts by Santa Claus, very cleverly impersonated by Mr. Stewart E. Rowe, much to the enjoyment of the children. Gifts and candy bags were given to nearly 800 children. In connection with this tree 35 baskets of fruit were distributed by the Boy Scouts in Mr. W.S. Peters’ automobile, kindly loaned by him for this occasion. These baskets were given to people confined to their homes.”

The following year, 1917, the world was at war. Most of the news involved Red Cross work to help support the Allied Forces. Still, the Community Christmas tree was lit and gifts were distributed to the town’s children. But the following year most of the festivities had been curtailed due to influenza. The Exeter News-Letter noted, “The community Christmas tree will stand on the Square this season, as in the past two years, but because of the special danger this year of sickness from exposure to possible severe weather, the singing will not take place.” It wasn’t exposure to the weather that townsfolk had to fear, it was exposure to one another. Canceling the singing was not a bad idea.

Since these early days, Exeter has decorated the downtown every year. For the past 16 years, the Festival of Trees has been held by the Exeter Area Chamber of Commerce to support the Chamber Children’s Fund. This year they were able to raise over $25,000.00 to provide warm clothing to area children. Unitil, our utilities company and the direct descendant of Exeter and Hampton Electric Company, still assists the town free of charge to hang the lights. Although some of the details have changed, the purpose of our downtown tree has remained the same – spread good cheer, help those in need and light up our dark December nights.

Photo: Christmas trees in the home increased in popularity after electricity became a common home utility. This tree in a local Exeter home, was photographed in the 1920s.
Email Post