This "Historically Speaking" column was published in the Exeter News-Letter on Friday, November 30, 2007. 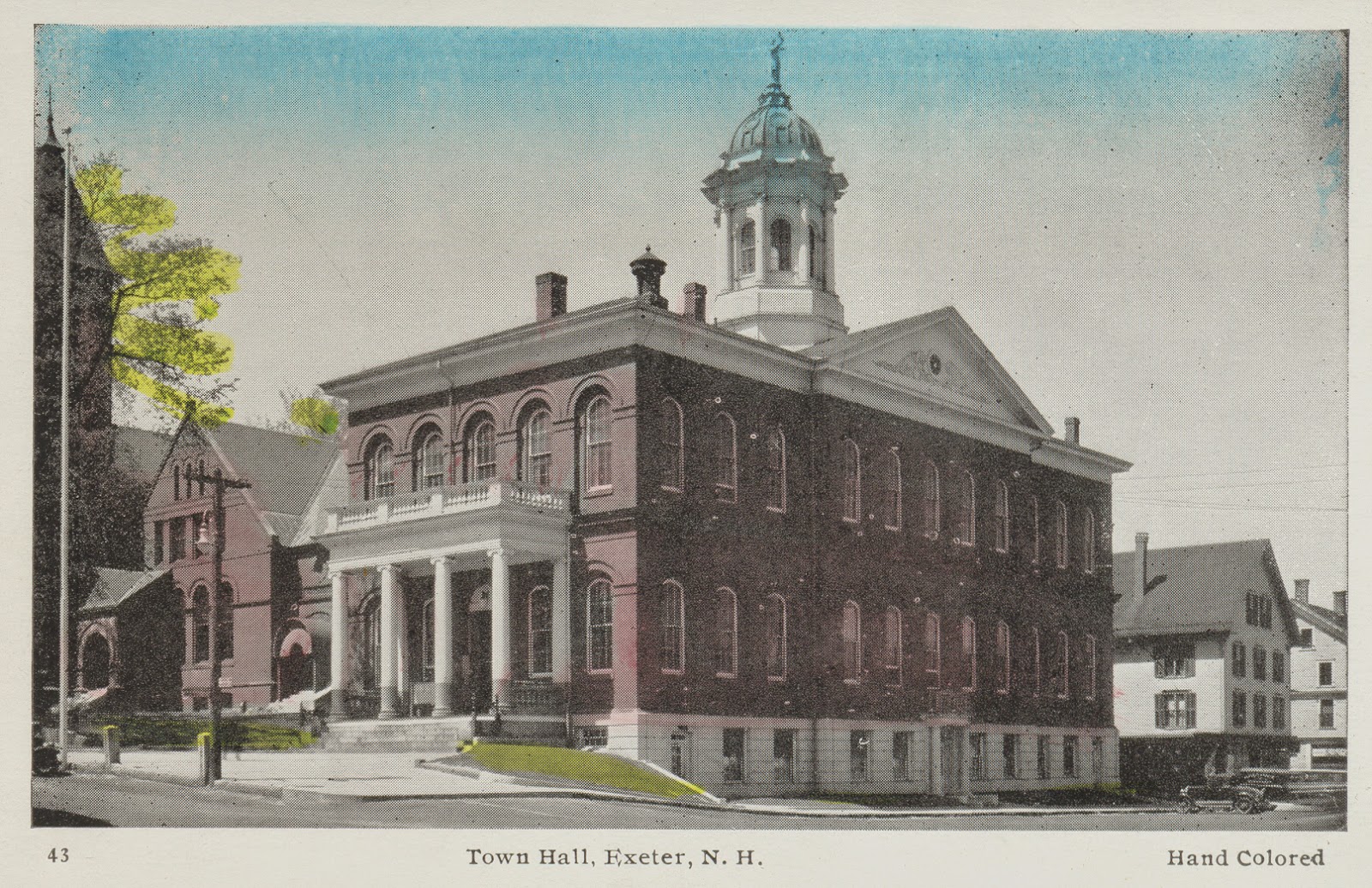 Sometimes too much change too quickly can be downright threatening. Imagine if the town government identified a problem, say lack of downtown restrooms and insufficient town office space, and then proposed altering a cherished town edifice to provide these very things. This was the controversy facing Exeter in March of 1931.

It all started when Judge Ernest Templeton, son of the Exeter News-Letter editor, John Templeton, pointed out that the town needed a new police station, courtroom, and cells. At the annual town meeting in 1930, a committee was appointed to look into the problem and make some recommendations for the next meeting. The other sore point in town was the lack of public restrooms. Shopping in the downtown by necessity had to be done in short trips. Especially if one was traveling with small children. Local merchants were keen to make the downtown as inviting as possible.

The 1931 Warrant included a proposal that would solve all of these problems. The 1855 Town Hall building had a perfectly serviceable, but inaccessible basement that could be converted, quite inexpensively, to office space, the district court, holding cells and public restrooms. The renovations would require removing the embankment on the Water Street side of the building to create windows and an entryway, which would widen the street a bit and provide for a continuous sidewalk to the square and a few more parking spaces. It seemed like the perfect solution.

But when town meeting day dawned, considerable opposition had begun to swell. Perhaps it was a reaction to the numerous building projects already going on in the town, but changing the look of the Town Hall was just too much for many people to swallow. Ambrose Swasey had already had a number of old buildings moved or razed for his new parkway and Phillips Exeter Academy was in the midst of a building spree, erecting nine new buildings. It must have seemed that the whole of Exeter was changing in this new modern world. The rickety wooden structures of Water Street that seemed to stay upright only out of habit were rapidly disappearing. Opposition to the town hall renovations was fierce.

When the votes were tallied, Article 15 passed by a vote of 214 to 208. The six vote difference wasn’t enough for a very vocal number of citizens who petitioned the selectmen for a new meeting. A new warrant was posted, and another town meeting was scheduled for March 31st to vote to rescind the action taken on Article 15. In the meantime, the same group filed an injunction to prevent the selectmen from acting on the original vote until the second was taken, lest they try to stealthily install bathrooms during the intervening two weeks.

Handbills and letters flew in every direction. Those opposed were adamant that the building would be ruined architecturally. The beauty of the downtown would be destroyed. “The motive of the leadership in this movement appeared to be both rule and ruin,” commented John Templeton. Supporters countered, “It is a mere handful of sorehead politicians who have persuaded a certain class of our citizens to join them in this ‘rule or ruin’ move to overthrow the perfectly fair vote of March 10. The same class opposed the change from oxen to horses and from horses to automobiles, and always see calamity in progressive measures. We are sorry for them.”

Three times as many voters turned out for the special meeting as had voted originally. Although they tried to paint it as a small number of people in opposition, the vote was again very close – 891 in favor of renovations and 825 opposed. Remodeling went ahead but the defeat was painful. Months later, John Templeton was still grieving. “We know that many well meaning citizens supported this project, but in view of the fact that it was entirely unnecessary, it seems incredible that a majority of Exeter’s citizens should trample on the sentiment of their neighbors and needlessly embitter public feeling. It is not like Exeter. That this spirit is today in the ascendancy is Exeter’s shame.” Had the vote gone the other way, no doubt the wound would have been as deep.
Email Post