This "Historically Speaking" column was published in the Exeter News-Letter on Friday, June 6, 2014.

Are there secret tunnels in Exeter? Lots of towns have stories about ‘secret tunnel’ systems that a few people say they’ve seen at some time in the past. Yet, none of these mysterious tunnels have ever been found. Most of the stories have connections to the colonial period or the Underground Railroad. Exeter is no exception to this type of legend and there are two tunnel stories that persist to this day.

Stories about a tunnel in the basement of the Gilman Garrison house begin to surface around 1900. The house, which sits on the corner of Water and Clifford Street, was built in 1709 by John Gilman. It changed hands over the years and by the time the tunnel story appears was owned by Jenny Harvey, a local school teacher. She and her sister, Asenath Darling, had begun the tradition of showing the house to interested visitors and school children. In his book about the house, The Old Logg House by the Bridge, Robbins Paxton Gilman tackles the legend and mentions that it was, perhaps, egged on by our local schools, “Some of our local senior Exeter citizens tell us that they have heard all their lives about the Garrison House tunnel and they assume that a tunnel either exists or has caved in. A few recount how Miss Elizabeth Baker’s eighth grade class at Exeter’s Robinson Female Seminary was taught as a factual matter in the study of New Hampshire history that a tunnel existed in the Garrison House. One lady recalls how she was taken by Miss Baker in the spring on a trip to the house and how the class walked through the tunnel to the river (‘It was lined with wood and damp’…’there was a niche in the wall where we were told the colonists stored gunpowder,’ etc.). Others note how, as children, they used to play in the entrance to the tunnel at the river’s edge until older and wiser people closed it up to prevent accidents.”

The house was purchased by the Dudley family in 1912 and William Perry Dudley was taken enough with the tunnel story to relate it to children while making classroom visits. In a note in the Exeter Historical Society files, however, his mother, Frances Perry Dudley, remarks; “There is a story that an underground passage led from the house to the river; but there is no trace of it now.” 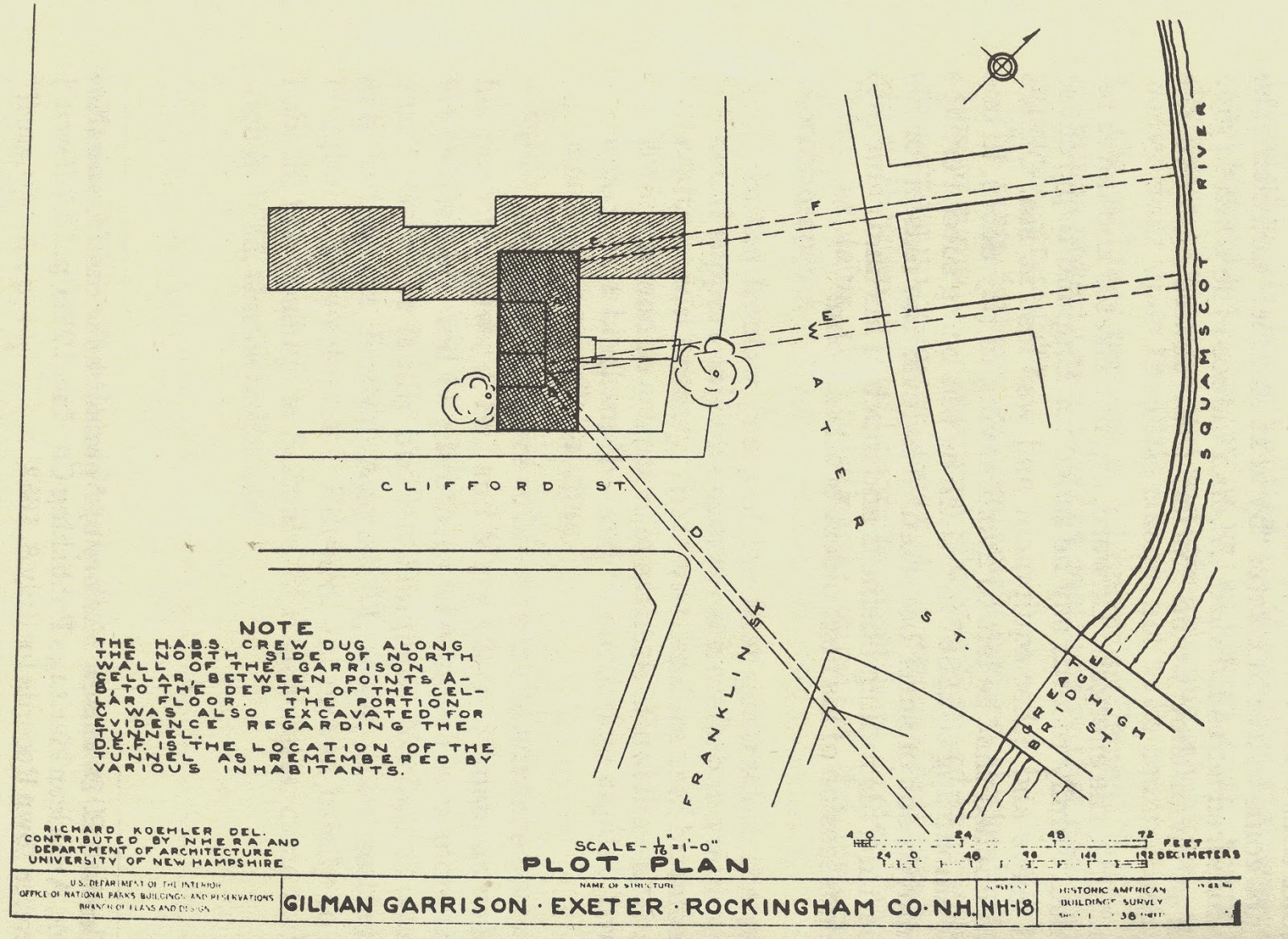 In the 1930s, the United States Department of the Interior undertook a project to document the nation’s historic homes. The Garrison house was included in the survey and great pains were taken to document the architecture and construction. On one map there is a note explaining the excavations that were made to search for evidence of a tunnel. This same map has dotted lines showing “the location of the tunnel as remembered by various inhabitants.” There are three different ‘tunnels’ – leading in different directions. The study was unable to locate any tunnels. Gilman concludes, as we should also, “this extraordinary claim may reduce fascinating folklore to absurdity.”

There is also no evidence that the Underground Railroad existed anywhere near Exeter. Many of us were nursed through our nation’s troubling slave history with calming stories of devoted white northerners who hid whole slave families in hidden rooms of houses, spiriting them off to Canada through tunnels with secret signals. There are no accounts in the newspapers or town records from the early nineteenth century to indicate that fugitive slaves were seen or pursued in Exeter. But for many years, children in town were taught that the Odiorne Bickford house on Cass Street was a ‘station’ on the Underground Railway and the evidence was a hidden room.

To be fair, there is a hidden room in the house. I’ve been in it, but it’s not so much a hidden room as an architectural feature caused by a dead space around the chimney. Lots of old houses have such spaces. The house seems to have become part of the Underground Railway sometime around the 1950s, when the civil rights movement was heating up. During that time, everyone wanted to be part of the Underground Railway, and since there was little documentation about it, every crevasse or attic crawl space was considered proof. The house on Cass Street has a slightly troubled history with slavery in that slaves actually lived there for several decades. Perhaps the story evolved as a means to atone for its earlier history. At some point, the hidden room stuffed full with slaves grew into a passage through the floorboards that led to the basement and a tunnel that led to the river. Let’s be clear – there is no tunnel in this house. It sits on sandy soil and like all the neighboring houses, has to have a sump pump running nearly all year. There is an underground stream that runs through the yard. The amount of effort it would take to dig and maintain a tunnel would have been extraordinary, not to mention unnecessary considering the house sits roughly 1/16th of a mile away from the river.

Why do these stories exist? Are we that gullible, or do we simply like the romance of a tall tale? Peter Smith, who taught at the Exeter Junior High for decades, remembers the tunnel stories well. He summed them up well as, “a good gimmick to get kids interested in history, it’s gloomy and dark, but probably not too feasible.” Perhaps someone will really find a secret tunnel system in Exeter (aside from the very real ones that exist at Phillips Exeter Academy – but that’s a story for another time), and we can then marvel at our ancestor’s cleverness. But for now, the evidence just isn’t there.

Image: Map from the Historic American Building Survey done in Exeter in 1936 shows three different locations for the tunnel that, according to local legend, runs between the Gilman Garrison house on Water Street to the river. No tunnel has ever been found.
Email Post