This "Historically Speaking" column appeared in the Exeter News-Letter on Friday, March 14, 2014.

Running late? Don’t blame the clock. Although many bemoan the fact that there are fewer and fewer public clocks (in much the same way that there are fewer and fewer public telephones), there are probably more ways to find the time today than ever before in human history. Younger adults have already largely given up wearing wristwatches – correctly understanding that these unitaskers are unnecessary when you have a small computer in your pocket. I still wear a watch, but it’s more out of habit. Even after my eyes have grazed the lower corner of the computer screen to check the time I’m apt to check my watch. It’s a hard habit to break. 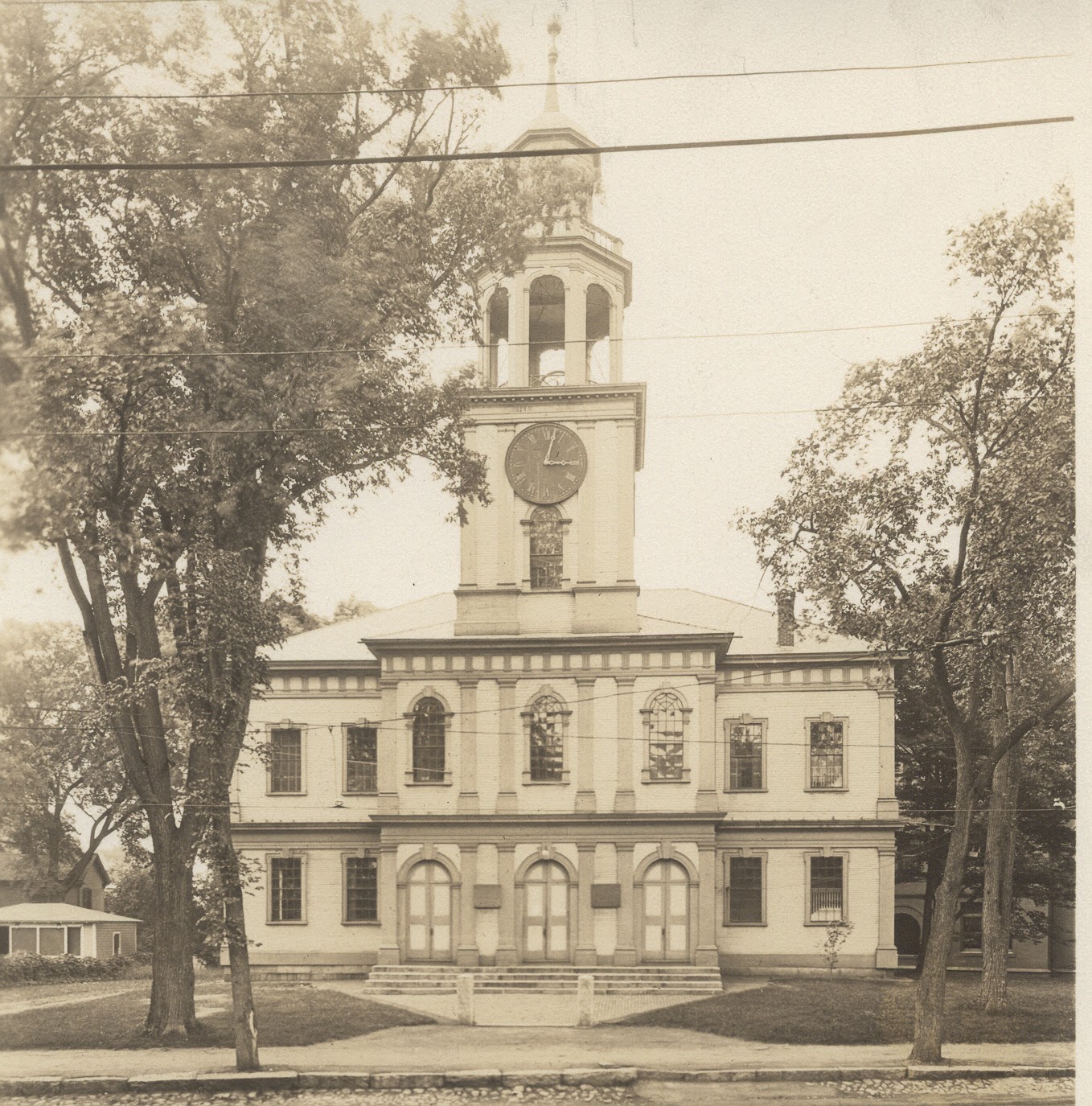 Of course, people didn’t always worry so much about clock time. Time was marked by the progression of the sun – long days in summer, short days in winter. Mid-day was when the sun was at its highest point in the sky. And time was very local. Noon in Exeter, New Hampshire, was earlier than noon in, say, Buffalo, New York, because we’re farther east. Standardization of time zones in the United States didn’t happen until after railroads began to demand an end to the chaos in 1883.

But before that, local time needed to be marked in some way. Then, as now, there were early risers and night owls who were continually in conflict about when the business of the day should begin. In colonial New England, you could run your family farm or business any time you felt like it, but to keep the community running smoothly it was necessary to get people to church, school or town meeting at the same time. Some means of marking time was necessary.

Clocks were expensive and all but the most intricate were somewhat unreliable. It was considered an important civic investment to have a town clock that would be the local standard. This clock would determine when the town bell was rung and when the town crier announced the news. There were probably a few private clocks in Exeter in the late 1600s, and the First Parish church records mention that there was an hour glass on the pulpit during sermons in 1733. This must have been helpful to both the minister and the congregation who, for whatever purpose, were hanging on to every word preached, either hoping the sermon would continue to inspire or mercifully end.

The first town clock mentioned in Exeter is the one owned by the Reverend John Odlin. Odlin came to Exeter in 1706 to serve as minister after the death of Reverend Clark and his contract included the use of the parsonage, where he boarded for a time before marrying Clark’s widow. Having acquired an income, ministry, home, wife and step-children, he also seems to have acquired a tall clock imported from England. Accounts vary about how he got the clock. John Taylor Perry, in 1898, wrote that the clock, “was a tall one, bought in England for Mr. Odlin by Governor Benning Wentworth.” But Governor Wentworth wasn’t a well-loved character in New Hampshire history and in 1925, Frances Dudley, who had come to own the clock, disavowed the purchase story in a letter published in the Exeter News-Letter, “Governor Wentworth does not deserve credit for any such act of altruism. The clock was the personal property of Parson Odlin, who brought it through the agency of Governor Wentworth at a time when the Governor was importing one for himself.”

However he acquired it, Reverend Odlin’s clock served as the official town timepiece for many years. Townsfolk routinely checked the time by peering into the parsonage. The town bell, which was located in the church tower, was rung three times daily; morning, mid-day and night. The times for the bell varied, the morning might be rung at 7:00 in the summer and 7:30 in winter, mid-day might be noon or 1:00 and the evening bell could be as early as 8:00 or as late as 9:00. The times were often different for different days of the week. This would drive a modern person around the bend trying to figure out what time it is, but didn’t seem to concern people much in earlier times. The bell was also used to call people to fires and to announce important news.

Nancy Merrill, in her history of the First Parish Church written in 1969, remarked that “the town placed a clock with four faces in the tower in 1848, the condition that it be kept in perfect order and all damage repaired at public expense.” This clock was enormous, and quite visible to even myopic townsfolk.

The town supported the clock and its upkeep, noting in the 1861 town report that David Quimby was paid $10.00 for ‘care of the Town Clock.’ Edwin Dearborn earned $40.00 for ringing the bell.

It remained the official town clock until 1950, when it was redesigned (and made smaller) by William Perry Dudley. The church purchased the clock from the town that same year for $1.00. By that time, public clocks had sprouted all over the downtown – there was one in front of the Exeter Banking Company and another by Sleeper’s Jewelry. Today, it’s hard to find even a time and temperature clock at the bank. But then again, there’s a clock on the dashboard of your car that travels with you and, of course, that smart phone in your pocket that can even tell you the time on the other side of the globe.

Photo:  The town clock on the First Parish Church in Exeter (now known as the Congregational Church of Exeter) in a photo taken in the 1920s. The clock was installed on the church tower by the town of Exeter in 1848. It was so large that it obscured a small part of the window, thus infringing on the original architect’s design of the church. The clock was redesigned in 1950 and became property of the church.
Email Post