Pearl Harbor and the Exeter Aftermath

This "Historically Speaking" column appeared in the Exeter News-Letter on Friday, December 07, 2012

News of the Japanese attack on Pearl Harbor began to trickle into Exeter in the early afternoon. Most Exeter folks had already gone to church and finished lunch when the news broke. Although everyone was expecting war to break out, the suddenness startled the community. 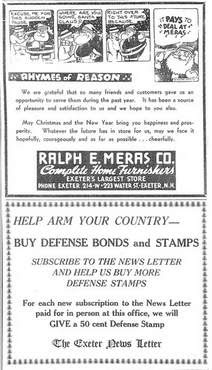 Plenty of local men had already joined the armed forces — selective service had begun in September — and some Exeter men were at Pearl Harbor. Their safety was an immediate concern, "Japan's savage assault last Sunday on the United States' far eastern possessions had its effect in bringing the war close to Exeter," said the Exeter News-Letter on Dec. 11, "for several Exeter service men are stationed in that area." It would be weeks, and even months, before all were accounted for.

"Welcome news last Saturday," came a notice on Dec. 18, "to Mr. and Mrs. Robert W. Varrill a telegram from their son, Robert A. Varrill, in the Navy at Pearl Harbor, who is safe (although he was in the fighting)."

The following week — Christmas week — "Mr. and Mrs. Charles H. Batchelder have received word from their son, Private John E. Batchelder, who is stationed with the air corps at Hickam Field, Honolulu. He was unhurt in the Japanese attack on December 7th." It took until March 28 for the Richard family to get word that their son, Donald, was safe and still stationed at Pearl Harbor.

Because war had been anticipated for some time, people were quick to take action when it actually arrived. Foremost on everyone's mind was threat of bombing raids. Exeter's citizens had seen newsreel footage of German raids on Britain since August. Their namesake, Exeter, England, had been hard hit that fall with the central part of the city flattened by bombing.

"As a result of America's startling involvement in the World War last Sunday," the Exeter News-Letter announced, "all Exeter agencies connected with civilian defense and the support of our nation's armed forces are hastily making preparations for any eventuality."

Along the eastern seaboard of the United States a series of watchtowers were fitted out to search for enemy planes. Exeter's initial tower was at the Robinson Seminary on Lincoln Street. At first, it was assumed that veterans would staff the air raid watch towers. The News-Letter, on Dec. 11 reminded, "All veterans are to meet tonight (Thursday) in the Town Hall to get observation assignments." It was soon discovered, however, that there were not enough veterans to go around. The best people for the job of plane spotting turned out to be high school students — they were dependable, eager and their hearing and visual acuity was far superior to the over-40 crowd.

The paper reported: "to indicate a blackout, the electric company will pull a master switch extinguishing all electric lights two times. At such signal, or in the event of an air raid alarm at night, all illumination which might be observed from the sky must be concealed by means of window shades and blinds and the use of low-wattage lamps if illumination is needed within." People were also cautioned that cigarettes could be seen from the sky during a blackout and should be extinguished during an air raid drill. Neighborhoods were assigned volunteer air raid wardens, who patrolled their territory during the drills.

The Fire Department put out a call for extra volunteer firefighters. Should an air raid take place, there would be a great need for firefighters. Dr. Louis Theobald became head of the defense medical division. His greatest concern was for nurses and he put out a call to anyone who had any formal nursing training. The town was divided into medical districts; each assigned a physician, nurses, aids and couriers. All nurses living in town were required to register at the Town Hall. The Red Cross bulked up its Motor Corps and began teaching first aid classes, which were heavily attended. There were also notices in the newspapers about keeping one's pets calm during an air raid. People were encouraged to create an evacuation plan for themselves and their pets.

Yet, with all this preparation, in December of 1941 life went on. Intermixed with dire warnings about war preparation are the usual notices of Christmas pageants, Academy lectures and road repairs. Stores advertised Christmas toys right next to blackout panels for the windows. Even in Concord, the mix of fear and routine was noted. "Meanwhile, the machinery of state government has to keep grinding, whether we are at war or at peace," said a dispatch from the statehouse.

There were no air raids in Exeter during the war. The most frightening aspects of war did not reach our shores, but the threat was ever present. Like most places on the East Coast, the town managed its fear through action — preparation. Had the enemy come calling, Exeter would have been ready.
Email Post