This "Historically Speaking" column appeared in the Exeter News-Letter on Friday, August 3, 2012. 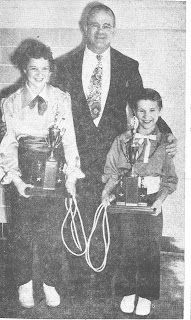 If the Olympic Games were held in Exeter, we’d be hard put to field a team in any of the many events. We’ve had some amazing athletes over the years, but no real standout teams. However, from 1947 to 1983 we did have an exhibition team that set Exeter apart from everyone else – the Exeter Rope Skippers, headed by the Exeter AREA Junior High physical education teacher, Gordon Hathaway.

In 1960 New Hampshire Profiles featured and article about Hathaway written by Robert Richmond. Hathaway was so convinced that his team was the best that, “his teams are so good that they never compete. No other school in the country has yet produced a team to challenge them, so their public appearances are strictly solo affairs.”

Hathaway himself wasn’t from Exeter. Born in Vermont and raised near Quincy, Massachusetts, he was a tough kid from a tough family. He boxed his way through Boston University, where he studied physical education. It was while in training that he first began skipping rope. Although long used by boxers and wrestlers to improve cardiovascular endurance, rope skipping was mostly known to the public as something done by school girls. Usually accompanied with taunting rhymes (‘girls go to college to get more knowledge, boys go to Jupiter to get more stupider’) rope skipping for anyone outside of the playground was a hard sell.

When World War II arrived, Gordon Hathaway joined the Navy and discovered that they didn’t need boxers. But they did need physical training and didn’t have a lot of room on-board a ship for athletics. He told New England Profiles, “the only exercise on shipboard was walking to chow, and coffee in between. I think I was the only chief Petty Officer in the Navy without a paunch, tanks to that skip-rope.” Richmond, said that Hathaway, “later served as a navy physical training instructor in the Pacific; the climate was too hot to include a skip-rope in the schedule, but Hathaway spent his off-duty hours entertaining the troops with his rope-skipping skill. He skipped on the gun-turrets of a battleship off Guadalcanal, in the jungle clearing, and on a transport plane heading home for his discharge.”

His discipline and dedication to the art of rope-skipping traveled with him after the war when he was hired in Exeter as the phys-ed teacher at the Junior High. Overcoming the girlie reputation was his first goal in the Exeter schools. By 1948 he had caught the eye of the Boston papers. The Exeter News-Letter reprinted some of the comments lauding Hathaway as “not only the best rope skipper on the continent but probably the best in the world.” He began to run training camps and recruit boys to the sport. His most ambitious project was a 16mm instructional film called, “Rope Skipping,” which highlighted the development of the Exeter program.

Hathaway’s skippers performed all over the state for hospitals and civic organizations. Richmond, who watched the show, said of the skippers, “they can skip while standing up, kneeling, sitting, and lying prone; while turning handstands, riding a unicycle and bouncing a pogo-stick; and on roller-skates and teeter-boards. Some of their show routines are startling. Everybody’s favorite is the double-decker skip, where one student rides another’s shoulder and swings a long rope while his partner skips.” The triple-decker, which the students mastered, was eventually removed from the show because the rope continually hit ceilings.

The tricks and speed brought attention to the sport, which was Hathaway’s real goal. In his opinion (and by all accounts, he had strong opinions) rope-skipping was the finest fitness sport, “It’s the perfect exerciser for sedentary men,” he told Richmond, “requires no space or professional equipment. As a matter of fact, even the rope isn’t necessary. You get the exercise from jumping up and down, but people are apt to suspect your sanity unless you have a rope attached to your hands.” His favored skipping rope was simple sash cord, the kind used in window sills. Each piece was carefully measured to match the skipper’s height and skill level.

Hathaway was featured on the TV program, “You Asked For It” in 1952 and his skippers made over 500 appearances in New Hampshire and Massachusetts. After 37 years of teaching in Exeter, Hathaway retired in 1983. “I had gym class and everyone was terrified at the thought of going through class with Mr. Hathaway. The respect demanded was unrivaled in all my school years,” recalled John Walor in Exeter AREA Junior High School – History and Memories. He was strict, but his skippers acquired self-confidence, discipline and enthusiasm for the sport. Improving Exeter’s fitness and increasing awareness for rope skipping was always Hathaway’s goal. Richmond’s article ends with, “’ And then,’ he says with a faraway look in his eye, ‘the sport may reach Olympic status.’” If that ever happens, it might open the door for Exeter hosting the Olympic games.