by Barbara Rimkunas
This "Historically Speaking" column appeared in the Exeter News-Letter on Friday, May 25, 2012.

In 1901, the New Hampshire State Legislature, prompted by Governor Frank Rollins, voted to appropriate funds to have a portrait of Civil War nurse Harriet Patience Dame painted and placed in the State House. Hers was the first portrait of a woman displayed in such a manner in New Hampshire. Attached to the 2nd New Hampshire Regiment, she served from the beginning of the war in April of 1861 until she mustered out in December of 1865 –without furlough through two enlistment periods. 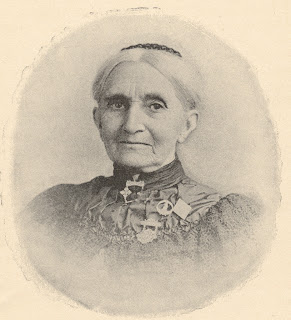 Harriet Dame was born in Barnstead, New Hampshire, in 1815. Harriet remained the unmarried daughter, staying with her parents into her adulthood and moving with them to Concord. She cared for both parents as they aged. After her mother’s death in 1854, she purchased a house for herself and her father and took charge of the household until his death in 1859. For a time, she opened her home as a boarding house, but with the outbreak of war in 1861, Harriet felt she had a more important duty.

Like most women, Harriet had never formally trained as a nurse. Her experience running a household and caring for invalids, however, made her an excellent candidate for the nursing corps. At 46, she was well within Superintendent of Army Nurses Dorothea Dix’s requirement that army nurses be, “matronly persons of experience, good conduct, of superior education and serious disposition.” Dix also warned, “Only women of strong health, not subjects of chronic disease, nor liable to sudden illnesses, need apply. The duties of the station make large and continued demands on strength.” This was no job for fragile or faint women.

Dame’s first months of service kept her in Concord ministering to the new recruits. Most New Hampshire men had never strayed far from home. The first weeks in a crowded army camp exposed them to illnesses they’d never encountered before. Measles quickly broke out along with the near-constant diseases of camp life, diarrhea, dysentery and typhoid fever. After the regiment moved on to Portsmouth for training, Harriet remained in Concord to care for the stragglers.

The 2nd Regiment was comprised mostly of men from Concord and Exeter. Their leader was Colonel Gilman Marston, a 50 year old lawyer from Exeter. In late July, they saw action at the First Battle of Bull Run. By that time, Harriet had caught up with ‘her boys.’ A fellow member of the regimental medical team, Dr. Joseph Janvrin (like Marston, an Exeter man) wrote of the battle to his sister Abby, “When we were fired upon at Bull Run on our retreat we were the last team and had four wounded men with us. We had to take out our horses and leave the ambulance saving the men and horses only. The cannon ball passed through the body of the carriage just as the horses were being taken out, it went on over the horses’ heads.” Marston was seriously injured during the engagement. “I had the care of Col. Marston and Captain Rollins from Centreville to Washington,” Janvrin wrote, “both were wounded. Marston’s right arm being shattered and Captain Rollins’ left shoulder the same. Both will survive and the limbs be saved.” Marston would never forget the care provided by Harriet Dame. “She was always present when most needed, and to the suffering, whether Yank or Greyback- it made no difference- she was truly an angel of mercy.”

During the ensuing years of the war, Harriet kept up with the regiment, often close to the action. She wrote later, “I have often dodged the shells when on the field. And once at Fair Oaks, Virginia, a shell struck my tent. I happened to be out at the time with Dr. Janvrin making some gruel over the campfire. Dr. Janvrin and I dodged at the same time and we hit our heads together so hard that each of us thought the shell had struck us.” She was captured twice by the enemy, each time talking her way out and respectfully being escorted back across lines.

At the war’s end, there was still a great deal of work to do. Soldiers were still recovering and Harriet Dame remained in service until December of 1865. When she returned to New Hamsphire, a grateful state Legislature voted her a $500 bonus – most of which she donated to the 2nd Regiment to build the headquarters at Weirs Beach. For the remainder of her life she lived and worked in Washington, D.C. at the Treasury Department, returning to New Hampshire only in 1900, her final year. In 1884, Dorothea Dix founded the Army Nurses Association and Harriet Dame served as its first president.

That same year, as Congress considered providing pensions to army nurses, Gilman Marston wrote of her, “Miss Dame is the bravest woman I ever knew. I have seen her face a battery without flinching, while a man took refuge behind her to avoid the flying fragments of bursting shells. Of all the men and women who volunteered to serve their country the late war, no one is more deserving of reward than Harriet P. Dame.”
Email Post