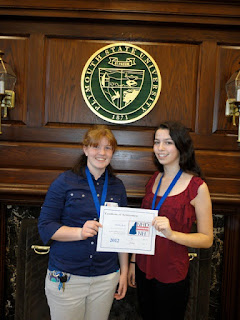 Two students from Exeter High School traveled to Plymouth State University on March 31st to compete with students from 14 school districts around the state for honors in the 9th annual New Hampshire History Day competition.

The 2012 National History Day theme is “Revolution, Reaction and Reform.” The students, Chandra Boudreau and Ainsley Katz, both juniors, won First Place in the Senior Group documentary category for their film, “By Word and Sword: Revolutionary Reactions to Lincoln's Wartime Reform.” The film examined goals for the Emancipation's issuance, reactions from different groups in the North and South, and the enduring legacy of the document.

Chandra and Ainsley began work on their film last June, just as the national commemoration of the 150th anniversary of the American Civil War was underway. Chandra Boudreau was able to conduct interviews with leading Civil War historians while attending the Civil War Institute during the summer. As a member of the First Place Senior Group Documentary team from Exeter High School who participated in the Nationals last year, Chandra applied insights she learned to make this year's film a stronger entry. “We learned a great deal during the research process,” Chandra said. “It was amazing to speak with so many historians for modern perspectives on the Emancipation Proclamation.”

Her partner, Ainsley Katz said, "We chose this topic because the complexity of the Emancipation Proclamation is often overlooked. Not only did the North have infighting over emancipation, but Lincoln himself struggled between his morality and his strong commitment to salvaging the Union."

The two students are now eligible to travel to the National History Day competition in Maryland, June 10-14, 2012 and will be working between now and then to raise the funds necessary for the trip. Their faculty coach, Exeter High School history teacher Molly Stevenson, who accompanied them to the History Day in New Hampshire competition, commented The extensive primary and secondary research as well as the interviews of historians and skills required to craft the film is a great example of real-world history work. There are clear deadlines and the final product needs to be educational and engaging for a public audience.”

The students now need to raise funds for the cost of their trip to Nationals. They are also very interested in showing the film to local groups or classes. For more information, contact Molly Stevenson at mstevenson@sau16.org or 603-395-2574
The Kenneth E. Behring National History Day Contest in June is the final stage of a series of contests at local and state levels. The contest is named for Mr. Behring in recognition of his support of NHD. Each year roughly 2,400 students and their parents and teachers gather at the University of Maryland, College Park for the week-long event. These enthusiastic groups come from all over the United States, Guam, American Samoa, Department of Defense Schools in Europe, and even Shanghai, China. “The National History Day excitement can be felt across the campus,” says the National History Day website. “After spending months on research and preparing their projects, and competing at local and state contests, these students are eager to show their hard work at the national level.” For more information on National History Day, visit www.nationalhistoryday.org