by Barbara Rimkunas
This "Historically Speaking" column appeared in the Exeter News-Letter on Friday, September 2, 2011. 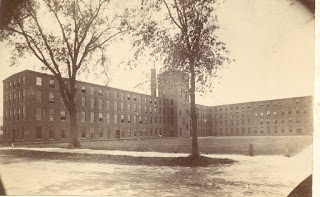 In 1899, a shoe worker at the Exeter Boot and Shoe Company earned, at the top pay-scale, two dollars and forty-three cents per day if he could stitch 90 dozen pairs of men’s shoes in one day. Women and children at the factory earned far less.

During the waning years of the 19th century, prices for most manufactured goods dropped. Factory owners responded by cutting costs in the easiest way they could – reducing workers’ pay. In 1898, most New England manufacturers, primarily in the textile and shoe industries, instituted a “cut down” of 10% for the majority of workers.

At the Exeter Boot and Shoe Company, General Stephen Gale notified all the workers in October that the cut down was the only way to keep the factory going. He assured them that it would last no longer than six months. The cut down began in December and the shoe workers tightened their belts, grateful to still have a job.

But by the following summer, it became apparent that there was more to Gale’s strategy than nobly saving their livelihoods. He opened another shoe shop in Hampton and hired workers there, but didn’t restore the cut down rates, as other New England mill owners had. The Exeter Gazette reported in April that, “the restoration in the wages of the employees of many of the mills of New England to practically the same basis as that in existence before the general cut down of a year ago went into effect yesterday, and the result is generally a satisfactory one to all concerned.”

Mills at Lowell, Massachusetts, and the mighty Amoskeag mills of Manchester reinstated pay rates for their workers, but Gale held back. Instead of paying his employees their original wage-rate, he began to play games with the economics of his factories.

The workers at Exeter produced three types of shoes: men’s, boys’ and youths’. According to the workers, in a statement published in both the Gazette and the Exeter News-Letter, “previous to the winter of 1898, the employees were paid the same price for men’s and boys’, while they did 72 pairs of youths’ for the price paid for 60 pairs of men’s or boys’.” But after the cut down, Gale began to pay for the boys’ shoes at the same rate as the youths’. Then he moved the more lucrative men’s shoe division to his new Hampton shop where he paid the workers less than his more experienced Exeter workers. Regardless of the fact that boys’ and youths’ shoes were smaller, they took the same amount of time to produce as the men’s because the tight turns required more accuracy and skill.

In August, the workers had had enough. On August 4th, 300 workers at the factory walked off the job.

Gale was incensed – particularly when it was noted in the Gazette that, “General Gale has a finely trained and well organized body of workers with a reputation outside of Exeter. A representative of a Boston shoe firm was in town yesterday looking after employees and another Boston firm offers positions to 15 stitchers.” Did this prompt him to offer the workers what they demanded: a restoration of pre-cut down wages? Of course not. Instead, he blamed the workers for their own predicament. In a letter sent to the newspapers, he whined that the workers should have put the six month deadline in writing when it was negotiated the previous year, “It would have been better for them to have given notice that it was their intention to ask for an advance to go into effect at some definite time, thereby giving both parties an equal opportunity to adjust themselves to the situation. The reduction of 10 per cent in the Exeter Boot and Shoe Co. was by mutual concession, and before it went into effect ample opportunity was offered the employees to look around and seek other situations where conditions might offer as good or better wages.”

At a mass meeting held at Foresters Hall, the workers issued a response to Gale, “This is unfair to the employees. They are not attorneys to be exact as to forms. They consider that there should be general good faith from employer to employed. If Gen. Gale wishes to remind us that we have been unbusinesslike in not having a written agreement, we shall gladly remedy that mistake in the future.”

Gale stood his ground and, as was usually the case in early labor relations, the workers suffered the most. Facing long-term unemployment, they had to decide whether to fight on for better wages or take whatever they could.

By December, the strike had dissolved. Gale never increased wages and would, in later years, put down any attempts his workers made to unionize. John Donovan, the leader of the strikers, found work in an iron foundry. The Gazette reported in January of the following year that “a party of button hole operatives leave here today for Norway, Maine, where they have secured employment with Spinney Brothers.”

Exeter never became a union town in any of her industries. Stephen Gale went on to serve several terms in Congress – happily elected by the other leaders of industry.

Photo caption: The Exeter Boot and Shoe Company (later Gale Brothers). The business began operations in 1885 and quickly became the town’s largest employer. In 1899, 300 of the 700 employees went on strike due to a reduction in pay.
Email Post