by Barbara Rimkunas
This "Historically Speaking" column appeared in the Exeter News-Letter on Friday, June 24, 2011. 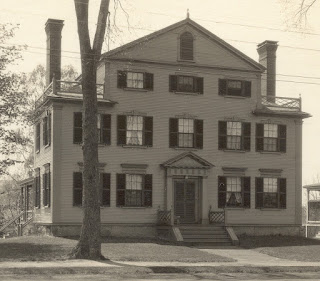 In order to move an enormous house across a river you need an enormous bridge. Exeter’s “Great Bridge” is hardly suitable for the job; in fact, its name seems like a put-on. In spite of its small stature, the bridge has actually had a huge house trundle across it. It was back in 1893.

Samuel Tenny wasn’t born in Exeter, he was from Byfield, Massachusetts. He was educated at Dummer Academy and Harvard, graduating with the class of 1772. He studied medicine with Dr. Kittredge in Andover after leaving Harvard. There were few medical colleges at that time, and it was more common for a physician to learn the trade under the tutelage of another doctor. The New Hampshire Medical Society History, published in 1966, notes, “It would be a mistake to assume that the establishment of medical schools in the colonies attracted throngs of students to their lecture halls, or that their degrees were looked on as requisite to practice. The 3,500 physicians active at the beginning of the American Revolution included a mere 400 with medical degrees. The remaining 3,100 qualified themselves mainly under the apprenticeship system, learning by observing and assisting in practice of experienced physicians.”

Tenney arrived in Exeter in 1775, intending to set up practice, but quickly got caught up in the American Revolution. When the fighting began at Bunker Hill, Dr. Tenney signed on and treated the Continental Army throughout the war – including during the long winter at Valley Forge with General Washington.

After the war, he returned to Exeter and formed a circle of friends – among them some of the most innovative and intellectual men in town. He was a member of many literary and historical organizations, writing a description of Exeter for the Massachusetts Historical Society in 1795. In it, he expressed his enthusiasm for education and a outright distrust of ‘common labourers’; “this, at least, is certain, that the morals of the inhabitants of country villages, which, in New England, are tolerably pure, would run a great hazard of being contaminated and depraved, by an intermixture of too many foreigners of the lower class of manufacturers, who, it is well known, are too generally idle, intemperate, and disorderly.”

In 1797, he and Oliver Peabody, Benjamin Abbot, Gideon Lamson and Ebenezer Clifford incorporated the first library in Exeter. He also took a bride – successfully wooing and winning the elegant and intelligent Tabitha Gilman.

But his interest in medicine waned. Politics held more of an attraction and he successfully ran for Congress, serving three terms in Washington. It was lucky, perhaps, for him that the ‘lower class of manufacturers’ were barred from voting thus giving him an edge with the property owning men who did elect him. Before he and Tabitha packed up for Washington, they hired his friend, Ebenezer Clifford, to build a house in the center of town.

Clifford styled the house on an English mansion and, with the assistance of Bradbury Johnson, who was himself a fine architect, built the house in Exeter’s town square right next to the newly erected First Parish Church, which the two men had also erected.

The magnificent house they created was striking. The façade was so unusual that when Phineas Merrill sketched his map of Exeter in 1802, he carefully reproduced the profile of the Tenney house instead of inserting his usual cartoonish and very generic house outline to mark the owner’s address.

Samuel Tenney lived in the house until his death in 1816. It was sold following the death of Tabitha in 1837, to Tristram Shaw, who, like Tenney, served in the United States Congress. The house’s location – right in the center of town – made it desirable, or at least made the property desirable.

In 1893, the Rockingham County Commissioners decided to build a new courthouse in Exeter, which was then the County Seat. The most obvious location for such an edifice was the town square. The Tenney house would have to go. Rather than tear the old building down, it was sold with the understanding that it would need to be moved. The ell was separated from the house and moved around the corner to River Street. Dana Baker, who purchased the main house, wanted it on his new lot on High Street.

Moving the house must have been the highlight of the summer of 1893, yet there is barely any mention in the local newspapers. Great Bridge, which had been reinforced heavily with solid timbers, bore the strain heavily on a Wednesday afternoon in June. No doubt everyone involved heaved a great sigh of relief. The house then traveled to its current location. “The Dr. Tenney house has this week been moved to a lot on High street and when located, with alterations and improvements, will be occupied by Mr. D. W. Baker,” commented the Exeter Gazette taciturnly, as if hundred year old houses of Revolutionary War veterans commonly wandered around town. It stands today, a member of the National Registry of Historic Places, on the corner of High and Gardner Streets.
Email Post

Me said…
We shared your story on Facebook via the Tenney Family Association Fan Page.

Thank you for sharing the story with us!

You may also wish to see a lengthy biographical post we compiled on The Honorable Samuel Tenney and shared with our Facebook Fans.
August 19, 2011 at 2:52 PM