The First Casualty of the Civil War? 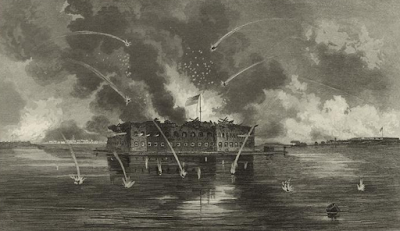 It is often difficult to determine the first casualty of a war. What date do you use to begin your discussion? In order to count as the first, is it necessary that the person died due to wounds inflicted in battle? What about freak accidents? How about non-soldiers who were "worked to death" as a consequence of the war? (Enslaved people come to mind when discussing this particular war.) Well, if we use the Battle of Fort Sumter as the beginning point of the Civil War, then we can at least say with certainty that Private Daniel Hough was the first soldier to die at Fort Sumter.

Were any men buried at Fort Sumter? We don’t know for certain, but it is generally believed that the first soldier to die at Fort Sumter, Pvt. Daniel Hough, was buried on the parade ground. It is unknown if he is still buried there, or was perhaps relocated during the course of the Civil War (if he was ever buried there at all). It’s interesting to note that Hough died an accidental death when a cannon discharged while he was loading it. This occurred the day after the battle ended, during a surrender ceremony.