Have You Checked the Forecast Lately? 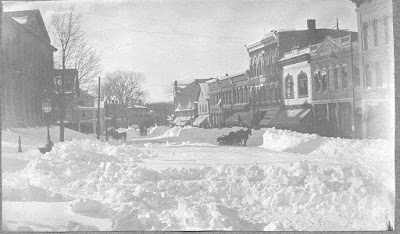 The latest "Historically Speaking" column appeared in the February 4th issue of the Exeter News-Letter.

In 1892, the United States Weather Bureau decided that the town of Exeter should have a weather notification system. The Weather Bureau had been transferred the year before from the U.S. Army Signal Corps to the Department of Agriculture, and some changes were occurring quickly. And so the town decided to notify the population through a series of steam whistle blasts from the Exeter Machine Works near the railroad depot. Although crude, it was still an improvement over previous systems.

In the nineteenth century, most people relied on folk wisdom and the farmer’s almanac for weather information. “Clear moon, frost soon,” went one old saying, along with, “much noise made by rats and mice indicates rain.” Some folk wisdom was actually scientifically accurate – anvil-shaped clouds do frequently indicate a thunderstorm, for instance. But “Hark! I hear the asses bray, I think we’ll have some rain today,” wasn’t really a good prognosticator of the weather.

Almanacs then, as today, were also very poor predictors of the weather. The Old Farmer’s Almanac for 2011, for instance, lists the weather for February 1-4th as “sunny, mild”. It may boast of being 80% accurate, but it really only manages about 10%, and even that is only because it correctly predicts that winter will be cold and summer will be hot.

The most popular almanac in New Hampshire during the nineteenth century was Leavitt’s Farmer’s Almanac, first published in 1797 by Exeter-born Dudley Leavitt. Leavitt, and later his son William, provided weather forecasts similar to the modern Old Farmer’s Almanac. Checking the accuracy of Leavitt’s weather predictions is easier than one might think. Exeter’s Nathaniel Shute kept records of the weather from 1873 until just before his death in 1886. For February 1st, 1878, Leavitt predicted the weather would be “mild”. Shute recorded the day’s actual weather as “a violent snow storm.” Good thing he hadn’t relied on the almanac and planned a sleigh ride to Boston that day.

Actually, Leavitt didn’t get a single weather event correct that month. When Leavitt said it would snow, Shute recorded the weather as “fair”; when Shute recorded“rain and sleet,” Leavitt predicted fair skies. Really, the most reliable way of predicting the weather may well have been grandpa’s trick knee.

It was the telegraph that made weather forecasting practical. It had been noted for a long time that weather systems moved across the country in a predictable manner. But when it took four days to ride from Philadelphia to Boston, the weather usually got there first. It was impractical to send weather dispatches by horse and rider. Even the railroad wasn’t quicker than a storm front. But a telegraph operator in Buffalo could send word of an impending snowstorm in seconds. The Army Signal Corps had capitalized on the extension of the telegraph system and began gathering and disseminating weather data at the request of President Ulysses S. Grant.

By 1891, when the Weather Bureau became a civilian organization, there was a definite desire for accurate weather forecasting. Exeter had to figure out how to get the information to its citizens. Earlier attempts, in the 1880s, to use signal flags had proved costly and impractical. Placing the flags on the roof of the Exeter News-Letter building on Water Street was more difficult than anticipated during winter. The flags were expensive and quickly became tattered. The practice was discontinued within two years.

It was decided in early 1892 to use the steam whistle at the Exeter Machine Works. Close to the telegraph office and nearly central to the town, the Machine Works was an ideal location. The whistle was already being used as a fire alarm system. The Exeter Gazette noted, “Signals will be sounded by the Exeter Machine Works whistle daily, Sundays excepted, at 12:50 P.M., immediately after the fire alarm whistle. Indications are for 24 hours following. The warning signal, to attract attention, will be a long blast of from fifteen to twenty seconds duration. After this warning signal has been sounded, long blasts (of from four to six seconds duration) refer to weather, and short blasts (of from one to three seconds duration) refer to temperature; those for weather to be sounded first.”

A signal card was available at Wetherall’s Drug Store to decode the blasts, but the system was simple: one blast was fair weather; two blasts meant rain or snow. Short staccato blasts indicated changes in temperatures and three such blasts meant a cold spell was on the way.

The system was only used for a few years. Perhaps the noise began to wear on people’s nerves (count twenty seconds and try to imagine a long, loud steam whistle blast of that duration every single day, excepting Sunday, of course). The new Weather Bureau tried a number of new ways to notify the public, but by the early twentieth century telephones made communication even faster than telegraph and by the 1920s, radio broadcasts brought news - including weather - right into people’s homes.
Email Post