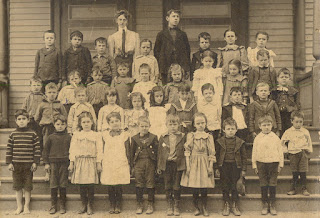 The latest "Historically Speaking" column appeared in the December 10th issue of the Exeter News-Letter.
by Barbara Rimkunas


“Mom, I don’t feel good.”
These are the most dreaded words a parent can hear first thing in the morning. The day’s plans are shot, the school has to be notified, possibly a doctor’s appointment has to be made and met, maybe a workplace has to be called, coverage found, ginger ale purchased and always the potential threat looms that any other children in the family might be similarly afflicted within a few hours or days.
But except for a few rare cases, most of the time our main concern is all the inconvenience. Kids get sick. Kids get better. We take for granted this usual progression of illness. A century ago it wasn’t quite so simple. For one thing, your child was likely to come home from school with something a lot worse than a stomach bug.

In 1900, the main childhood killers were infectious diseases such as scarlet fever, measles, diphtheria and whooping cough. All of these are highly contagious and would spread like a wild fire through classrooms. There were no vaccines and no effective treatments besides supportive care. The only tried and true way to prevent an epidemic was quarantine.

By the late 1880s, most states, including New Hampshire, had created a board of health. Regulations were enacted to close down ports if cholera was detected. Sanitation systems were improved to create cleaner streets and safer drinking water. And procedures were developed to make some illnesses “reportable.” Local doctors were required to report and, if necessary, isolate any suspected cases of these illnesses.

The New Hampshire quarantine regulations from 1916 included the entire family of a sick child: “When a child is sick and suspected of having a contagious disease, other children in the family must not attend school until they produce a certificate from a respectable physician that there will be no danger of their communicating the disease to other pupils.” A sign was placed on the family’s house notifying everyone of the quarantine.

Usually, the father would escape to stay with a neighbor or other family member. His income was too important to lose because of a child’s illness. But if both mother and father were employed – and in Exeter many families had both parents working in the factories – quarantine created a financial hardship. And the quarantine period was very long. Today if your child misses three days of school it’s considered unusual. The 1916 regulations required – at minimum – a 15 day quarantine for measles and chicken pox and up to six weeks for scarlet fever and whooping cough. Why all the fuss? The following account from the Exeter News-Letter in January of 1901 illustrates the difficulties and tragic outcomes that could happen. In this case, a teacher was the first to notice that one of her pupils had missed a number of days of class:

“Miss Annie l. Davis, teacher of the Prospect hill primary noted her absence on Monday, and on inquiry of her scholars was told that she had the measles. Miss Davis promptly notified the school board, and that in turn the board of health. Dr Nute made an immediate investigation Monday afternoon, having almost to force his way into the tenement. The girl, who the father declared was not very sick, was found by Dr. Nute to have not measles, but scarlet fever in pronounced form. He promptly quarantined the house, and gave the requisite instructions to its occupants, the men being unreasonable and hard to deal with. An hour later Dr. Nute had occasion to revisit the neighborhood, and found one of the children at a neighbor’s and other violations of the quarantine. The board of health consequently invoked police aid.”

The police placed a watch on the house and the entire neighborhood, but it was too late. The children next door quickly developed symptoms and their mother and older sister, who worked in the household of Phillips Exeter Academy professor John Kirtland, brought scarlet fever into his home. The professor and his three sons developed the disease and became gravely ill. The two younger boys, aged 10 months and 3 years, both died within a week of one another.

This particular episode took place before quarantine rules were well-known among the general public and it is of note that the violators were all recent Polish immigrants who were unschooled in the newfangled rules of public health. The News-Letter’s article was meant as a cautionary tale, as the account of the events was preceded by a notice from the school board; “Even if new cases, already contracted, should develop, the teachers are on the watch for any symptoms of illness and will promptly report any case at its earliest stage.”

Parents were under advisement that the children’s health was being monitored. Sick children were reported and children who missed school were investigated. As restrictive and financially devastating as quarantine could be, there was too much at stake.
Email Post